The Death Threats and the Madrid Elections

Spain is reeling from the political events in Madrid as the regional campaign for the election on May 4th approaches the final days. The Vox poster comparing Granny’s modest pension to the money lavished on the foreign immigrant kids had stirred up feelings which (probably) helped one, ah, ‘patriot’ to mail on Thursday bullets and threatening notes to the Minister of the Interior Fernando Grande-Marlaska, Pablo Iglesias (UP) and María Gámez, the director of the Guardia Civil.

This Monday, a copy-cat package with a return address written on it, containing a bloodied knife, was discovered, addressed to the Minister for Tourism Reyes Maroto. It was found to be ‘the work of a schizophrenic’ who was later identified as an eccentric relative of Vox spokesperson Iván Espinosa de los Monteros, the husband of Rocío Monasterio.

Following the light relief, on Tuesday packages with bullets for the regional president Isabel Díaz Ayuso (here) and again for Iglesias (here) were found by Correos. On Wednesday, it was the turn of ex-President Rodríguez Zapatero. 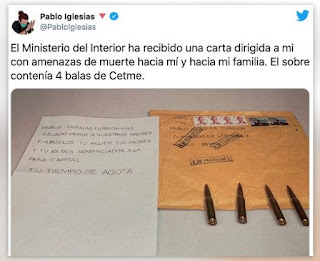 Maybe, as the far-right Sueldos Publicos suggests, it’s because they all get paid too much.

A radio debate on La Ser between the five main candidates (the PP’s Isabel Díaz Ayuso was a non-show) on Friday rapidly went pear-shaped after the Vox candidate refused to sympathise with Pablo Iglesias’ surprise package and, this created so much offence that Iglesias marched out of the live radio program, followed shortly after by the PSOE candidate Ángel Gabilondo and Mónica García (Más Madrid) – leaving just Rocío Monasterio (Vox) and a slightly harassed looking Edmundo Bal (Ciudadanos). The program was cut short and another live debate planned for LaSexta was promptly cancelled.

Now there are those who say the bullets were a stunt, and those, like Hugo Silva, who noted on Twitter that when ETA used to do this, it was known as ‘terrorism’. But it is becoming tense.

The joke-photomontage appearing on the cover of El Jueves shows a picture of an indignant Abascal waving a book that someone had sent him in a package – ‘They want to end our ignorance, but they never will!’ says the caption.

Since the PP can’t govern without Vox and the remains of the Ciudadanos party, nor indeed can the PSOE without Más Madrid and Unidas Podemos, we are faced, say the pundits, with two choices, depending on how they swing:

It’s either ‘Freedom against Communism’ (here) – or ‘Democracy versus Fascism’ (here).

So, it’s back to a two-party system, only in this case not a very happy one.