The trick lies in not seeing the trick

To form a government, Sánchez either needs a parliamentary majority – which seems impossible – or at least a majority of ‘yeses’ over the ‘nos’ with the doubtful parties relying on abstaining.  Unfortunately, the three right-wing parties of PP, Vox and Ciudadanos won’t allow this situation to ease by abstaining, leaving us with the current scenario. So far, the plan to join with Unidas Podemos has received the support of 92% of PSOE militants who answered the consultation (here). Currently, attention is focused on gaining the tacit support of the ERC, the Esquerra Republicana de Catalunya (wiki). 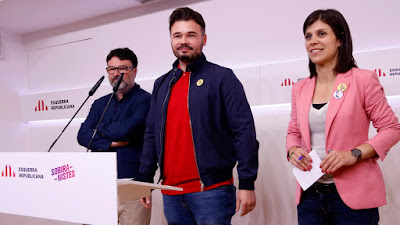 The ERC is an independence party with its leader Oriol Junqueras imprisoned for thirteen years for ‘sedition’. The party has consulted its militants and found 95% won’t support an arrangement with the PSOE without ‘a negotiation over Catalonia’. (Or, as El País gamely puts it: ‘Massive support of the ERC militancy to the leadership plan to negotiate the investiture of Sánchez’). That arrangement says Moncloa.es here, would include pardoning the political prisoners jailed (or in exile) over the pròces.

‘Critics of the PSOE warn: the pact with Podemos and ERC "puts coexistence at risk"’, says VozPópuli here, adding ‘A debate platform called La España que reúne, sponsored by the former French socialist minister Manuel Valls, warns that "Spain is in a troublesome situation" and that a PSOE and Podemos government pact, with the inevitable support of an ERC that has not renounced its plan to break the unity of the country "would be a very serious political error and irresponsibility that would put our freedoms and citizen coexistence at risk"...’. The platform would like to see a PSOE-PP-C’s partnership. José María Aznar is also fully against a PSOE/Podemos government and says ‘you’ll be hearing a lot from me in the future’ (here).
If all goes to pot, then a fresh election will be held, says El Español, on April 5th 2020.
Posted by Lenox at 10:57 No comments:

Spain’s judges are busy this week, dispensing justice to ex-politicians and crooks both. In politics, which must always take centre-stage (after all, we voted for them), the ERE case in Seville takes the lead. Two ex-presidents of Andalucía were in the dock with nineteen other ex-officials for mismanagement and worse of a truly gigantic sum of ‘public money’: 680 million euros. None of which, of course, after an investigation lasting a decade, has been retrieved. It is said that corruption and politics go hand in hand in Spain... like pan y chorizo.
The damage to Andalucía’s reputation is immense, of course. Here, at Cuarto Poder, they talk of ‘andalucidio’. But the capital of Seville has enjoyed a reputation for crookery for several decades (remember the EXPO 92?).
In the sentencing, ex-president Manuel Chaves got fifteen years inhabilitación (barred from public office – not, at 74, that he has any plans) and his successor José Antonio Griñán was served with six years of jail plus his inevitable inhabilitación. More on the background to the ERE is here  and the accused, one by one, are examined here.
The political reactions over the ERE case: ‘It is not a case against the PSOE but of former officials of the Junta de Andalucía’ say the Socialists while the PP calls for ‘political responsibility from Pedro Sánchez’. Santiago Abascal wants ‘the isolation of the most corrupt party in Spain’ and Albert Rivera (who he?) has asked Pedro Sánchez to resign. Those stories from El Mundo are here and here. El País, which has a more liberal colour, contents itself with ‘The ERE and Gürtel corruption cases: differences and similarities’ here and, in their English edition, here. Finally, Pablo Iglesias from Podemos tweeted that the two-party system breeds graft, whereas multiple parliamentary parties is a safeguard against it. He says ‘Spain will no longer tolerate corruption’.
That’s not to say that Podemos doesn’t have issues with the courts. Isa Serra, a deputy in the party, was involved in a fracas during a protest against an eviction back in January 2014. The trial will begin soon says the ABC here.
Life, in short, goes on.
In Catalonia, the president Quim Torras was summoned to court on Tuesday for refusing to remove the yellow protest ribbons (against the sentencing in the process) during the April elections. ‘I disobeyed, because it was an illegal order’, he told the judge. The prosecutor is asking for a stiff fine and twenty months inhabilitacíon (which, for an acting politician, is a meaningful punishment).
But, away from politics...
The electric company apparently pulled a fast one... ‘A judge charges Iberdrola for fraud in their photovoltaic plant in Badajoz. The multinational rented a huge estate without informing the owner that the use of renewable energy would allow its subsequent expropriation at bottom prices’.
The manada are a group of five youths who have been sentenced for a group-rape in Pamplona during the Sanfermines of 2016. This week, they were in court again for videoing the attack. Two of them received at extra three years prison to add to the fifteen they are already serving. Four of them are also being tried in a separate rape case from Córdoba.
Finally, the over-zealous publisher of Moncloa.com is being tried for extortion over an investigation by the news-site into the activities of the ex-commissioner Villarejo (who is in turn under repeated investigation for any number of crimes (here).
Posted by Lenox at 10:22 No comments: 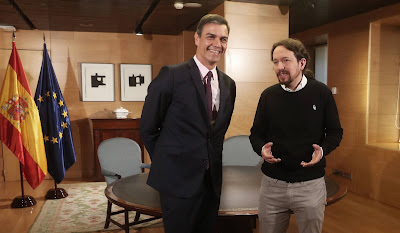 The results are in and the numbers were apparently even less useful than the previous elections last April. However, on Tuesday, Pedro Sánchez and Pablo Iglesias, leaders of the PSOE and Unidas Podemos respectively, made a joint statement, having agreed a deal to govern in a coalition. The two parties are still short on a parliamentary majority, but they will gather enough support, either in a first or second vote, to form a progressive government for late December.
In the election results, the PSOE lost a couple and Podemos lost a few, making the left a little weaker. The PP and the Vox gained heavily, making the right a little stronger, however, Ciudadanos (the weak third leg of the so-called 'trifachita') collapsed, falling from 57 seats to just 10 (even the regional ERC did better, with 13). The party-leader Albert Rivera duly quit his post (and his seat) on Monday after calling for an immediate party congress. His Nº2 Inés Arrimadas will likely take over.
Maybe the remains of Ciudadanos will see their earlier (cataclysmic) error and this time support the PSOE/Podemos partnership.No, apparently not.
The forthcoming progressive government will suppose a vice-presidency for Podemos and a number of new programs. The 'preacuerdo', in ten points, is here.
An issue that has clouded the water is the voting system itself. How can one party get thirteen seats with 870,000 votes (ERC) while Ciudadanos with 1,637,000 votes got only ten seats? The answer is the d’Hondt Method, a mathematical calculation used to assign winning seats.
In short, it’s a messy solution. The case for the PSOE (and the country) was this: they couldn’t do it then, but they can do it now, when things are even more complicated, which means, of course, that they should have done it then. All of which reads as: poor political management this summer from Pedro Sánchez.
Now he has a powerful new enemy in Vox to deal with in the public arena.
... ...
To see how your municipality voted (or, if it worries you, how many of your neighbours voted for Vox) go here.
Posted by Lenox at 05:53 No comments:

Hot Time in the Old Town

Between the Spanish and the British elections – the one on November 10th and the other on December 12th – the news-pages have been busy. Busier still is the social media with an endless supply of generally negative posts coming from all sides. It’s a big pot in either case – Spain to bring in either an angry left or right wing coalition, while the UK is to get a firm or not so firm Brexit, or maybe even a reprieve.
Since many of the readers living in Spain can’t vote in either of these elections, for one reason or another, it’s all something to either try to stand above, or to observe with incredulity and anger.
Facebook, so popular with many of us, is currently a place to visit with care and a pair of rubber gloves. No longer kittens, girl-friends and beach scenes, it’s now filled with hatred and poison. OK, and football too, and dogs. Some things are eternal.

Where do they find this sickness? On special pages (or maybe they write it themselves).
It’s to be expected that if someone re-posts stuff found on some extremist page, then it’ll be extremist stuff. And thus, we race to the bottom.
Extremism is in, and more rational centre-politics is out.
From Oxford University (here):  “The majority of growth comes from political parties who spread disinformation and junk news around election periods. There are more political parties learning from the strategies deployed during Brexit and the US 2016 Presidential election: more campaigns are using bots, junk news, and disinformation to polarise and manipulate voters.”
Besides the many provocateurs and fifth columnists (Leapy Lee?) we must deal with, we also have the bot (not BoT)-driven pages from an attic somewhere pumping out emotive propaganda and flat-out lies designed to manipulate the readers. In the UK, Jeremy Corbyn gets a particularly heavy dose of it; while in Spain, of course, it’s Pablo Iglesias – both being considered as major threats to the ruling status quo. However, a lot of this bilge is aimed at other candidates too. The Liberals are seen (for once!) as a peril in the UK, Boris Johnson as another and so it goes on.
Not much of this crude barnstorming is positive. Tell us about your candidate, not about mine!
The Guardian takes us to a commercial troll farm in Poland where ‘...an undercover reporter infiltrated the company, giving rare insight into the means by which fake social media accounts are being used by private firms to influence unsuspecting voters and consumers...’.
The UK had (has?) the notorious Cambridge Analytica (wiki) and Spain, apparently, has the services of an agency (here) which is currently pumping out well-prepared negative propaganda (posters included) against all parties except the PP.
Indeed, ElDiario.es considers that ‘The dirty PP campaign does not comply with the ethical codes of political communication: "It's like playing with marked cards"’.
Pablo Casado, for his part, denies everything.
Between the clever manipulations, the improbable news-stories (El Español is always good for these) and the hate-merchants who pump out crude attacks against their particular bug-bears, it’s a good time to steer clear of social media. Until, at least, next year.
Think of it as an early resolution.
Posted by Lenox at 13:41 No comments: