Revolution and a Saucepan 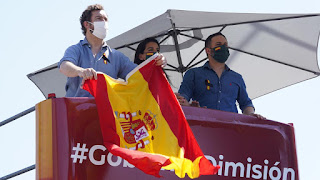 So we come to Saturday’s protest. A clever idea to make it a demonstration with cars (poor people don’t own cars, and lookit, Hertz has gone bust). Six thousand cars and motorcycles, bedecked with flags of course, jammed the centre of Madrid, where six or ten thousand people wouldn’t have done the same. The leaders of the Vox were on their stage, at the symbolic Plaza de Colón: Columbus Square. ‘We want to bring down the traitor Pedro Sánchez and imprison him for crimes against the Spanish people’, said Santiago Abascal, the leader of the far right party, wearing a nifty lapel pin of half Spanish colours, half black mourning.
The leader of the larger Partido Popular, generally considered as a right-wing party by anyone except a Vox supporter, is now struggling for space on the political perch. Pablo Casado is trying to woo the far-right voters back to his colours with, as eldiario.es calls it ‘his total war against the Government’.
Whether the Government, evidently inexperienced in matters of pandemics, has done or is doing a good job or not is irrelevant. They will be judged once it’s all over. Right now, they are facing two dangerous enemies: the virus and the opposition, both set on scoring maximum damage.
The fact is that the conservatives are winning the war at the moment – and Spain most certainly does not need a second open conflict.

The Power of the Index Finger

Right now, I’m enjoying a local page set up on Facebook called 'Mojácar: Rincón de Embrujo' which shows old photographs of people and relics from the village in Spain I’ve called ‘home’ for half a century. These pictures often connect, or make me smile, or help me remember those who have died and sometimes disappeared from my thoughts.
Mostly these days Facebook is about politics (‘viewpoints’) and increasingly hostile to other opinions. The days of goofy kittens and dogs that catch a Frisbee seem to have moved on to attacks against political groups (in preference to celebrations of one’s own favoured party or leader), obscure petitions (‘only another 641 signatures needed’) and improbable cures.
Whatsapp appears to have been appropriated by those who spend all day sending out bulos, the fake news that is designed to make us indignant.
In Spain, it’s usually about Podemos, of course.
Small and obscure positions are often featured on social media (I’m too old to even quite know what Instagram, Twitter, Snapchat and so on are) and, with enough punch, they can soon grow to become trending, that’s to say, to attract more attention than they are worth. Take the chauffeur-driven chap in his open car, Spanish flag and loudhailer who briefly toured a couple of streets in the smartest area of Madrid, the Barrio Salamanca, calling for the government to fall. A silly story that started out on YouTube and Facebook which soon went viral – precisely because all who saw it, clicked a ‘like’ or an ‘angry’ and then shared it with their followers.
Another one (maybe a mistake, maybe a fake) comes from El País in English and its translation of Pablo Casado as 'Pablo Married'. C’mon, how can you not pass a thing like that around?
In certain instances, the social media has probably brought about fundamental shifts. Donald Trump (the Twitter-king) would never have become the Republican candidate without the barrage of comments and posts from the Keyboard Warriors of America, making an obscure candidate mainstream (‘About one-in-five adult Twitter users in the U.S. follow Trump’ says The Pew Research Centre here).
As eldiario.es says here, the anti-vaccinators are another example: an obscure, silly and improbable idea that is suddenly pushed to the front by endless visibility posted by those who, typically, have no training in science whatsoever. Down with Bill Gates (who, apparently, wants to vaccinate us and turn us into slaves for some unknown reason)!
A study in Nature says ‘Groups opposing vaccines are small in size, but their online-communications strategy is worryingly effective and far-reaching…’. 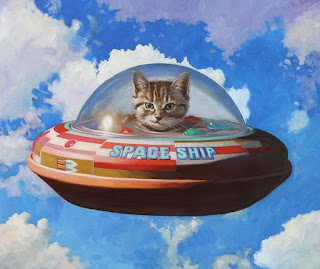 We’ve seen posts and videos that claim that the coronavirus is an artifice of the, uh, New Order, who are going to turn us all into something terrible (terrible, I tells ya). There’s not much on Google, besides a pop group of the same name, but then there’s Trump’s nemesis, the Deep State, so maybe they mean that.
Here’s the Kremlin’s sinister hand (apparently):  ‘Secret Labs and George Soros: COVID-19 Disinformation in the EU Eastern Partnership Countries’.
Another time, we can look at UFOs, fairies and the Matrix.
Maybe I’ll post something on Facebook about them later.
It could go viral.
Posted by Lenox at 03:14 No comments:

Settle Down, Friends, or This Ain't Ever Over.

This past Monday, 51% of Spain came out of strict lockdown for a slightly easier model, which, among other permissions, allowed us to congregate in small groups of under ten, socially distanced, around the doors of those bars which had opened for the occasion. The idea that tables would be two metres distant and potential customers wouldn’t pass within the exclusion zone on the way to their own modest bacchanalia was as absurd as were the crowds of people that engulfed certain terraces and kiosks.
Now, it’s been hard for those living in the city, or in small and crowded apartments, and the opportunity for a beer, a tapa and a chinwag with friends proved hard to resist. By Tuesday, the news was full of joints that had been closed down by the police and the customers sent ignominiously home (Bilbao, Santander, Almería and so on).
Then there was the overflowing Murcia bus and the crammed flight to Palma de Mallorca.
Not all of Spain ascended to Phase One, and there was plenty of criticism from the regions that didn’t. In Andalucía, most of us made the grade, but the two provinces of Granada and Málaga (yes, and the Costa del Sol) remained for at least two more weeks in the lower division, and the president of the Junta de Andalucía was suitably scathing on his regional TV about the irrational discrimination from Madrid.
In Madrid, another Zone Zero region, they celebrated their relegation over the weekend with a reported 400 illegal home-fiestas and 97 botellones (wiki).
Finally, we learned that the Vox supporters are asked to drive around in their cars (with, one can only hope, their windows up) on Saturday May 23rd waving their suitably gloved-fists against the ‘social-communist government’ for its hopeless handling of the whole shebang.
All in all, the serious message about taking care neither to spread nor to catch the virus appears to be falling partly on deaf ears.
Posted by Lenox at 03:41 No comments:

When Will Spanish Tourism Recover? 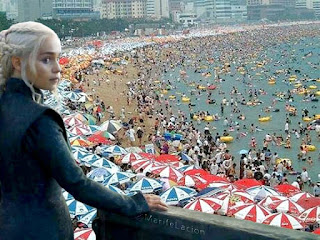 For Spaniards, if you can’t have a summer holiday abroad, where would you go? The leading destinations, according to a survey by the tourism-oriented Hosteltur, are Andalucía, the Balearics and the Comunidad Valenciana. Of course, many city-folk have roots in their pueblo, somewhere they or their forebears left for the opportunities of the smoke, and they will likely return there, maybe staying in some discomfort in the abuelo’s house. At least, it should be safe enough in these difficult times, ¿no?
Hotels, campsites, hostales rurales, Airbnb (that was a bust!), their holiday home (‘la segunda vivienda’), but not cruises or foreign adventures this year: it’ll be too dangerous, too restrictive and probably too expensive.
The domestic holiday destinations should be fully open by July, says the tourist Minister Reyes Maroto. La Vanguardia looks at the carefree holidays for Spaniards this season: masks, disinfection, limits on numbers and proximity, and no more breakfast buffets it says.
A second piece here in Hosteltur says that Spanish domestic tourism will be the only player on the playa this year (you're welcome) but that even this market will be smaller than it was in 2019.
For foreign visitors, of course the problem is reversed. The frontier rather than keeping Spaniards in, will be keeping foreigners out.
Schengen Visa Info quotes the EU government as being ‘in doubt’. As far as Spain is concerned, the article says ‘…“We need to carefully look at what has happened to those countries where the Coronavirus struck early on in Asia. They reopened their borders, and then the Covid-19 cases started to rise again,”…’. One (rather grim) option on the table sees the ‘EU mull ‘Covid-19 passports’ to restore the tourist industry’.
Currently, Spain, just as France, is prioritizing domestic tourism.
The question is the timing – when will foreign tourism be allowed back to Spain? Most pundits are saying not until October – a truly disastrous forecast for this summer season’s business.  An expert from the WTO reckons on 800 million less tourists in 2020, a fall of 80% in world tourism. A prognosis like this can only be guesswork – once again, will the frontiers be opened soon?
The serious media are in no doubt. El Economista says that ‘the borders will remain closed until October’ and that ‘a summer is expected without foreign tourism’. The ABC agrees, while saying that the schedule is ‘indicative’ (and probably changeable if the PP and Vox get their way). The Guardian warns that ‘Covid-19 throws Europe's tourism industry into chaos’, but says that some regions of Spain are pushing hard to reopen for business as usual ‘…Officials are cautiously hoping that international tourists could be allowed to visit Mallorca and Ibiza from late July…’. In Andalucía too, they are hoping to get going again, at least with domestic tourism, as the weather warms up and the cases of Covid-19 go down.
The other worry is that, even with the system back in place, will people still want to get in an aeroplane, or a foreign hotel dining room? With the new rules for bars and restaurants (however they end up being made), will visitors still be looking forward to a crowded locale with cold beers and the football game on the telly at some Costa del Sol joint? What about the rules for the beach or the museum? Will there be fines? Can they still do ‘balconing’ or fall about drunk in Magaluf like they used to?
Foreign visitors may be welcome in a restaurant, but will they be welcome on the street?
It may be time to recast the whole business of tourism.
El Economista again, quoting a leading Wall Street financier on Spanish tourism: “Spain should not try to keep a sector alive if it is known that it will not survive in the next decade”.

As always, there's much more news from the Spanish media on tourism, housing, business, politics, seniors, Catalonia, the coronavirus and other useful topics in this week's Business over Tapas. Facebook for free, or why not subscribe for the full package?
Posted by Lenox at 11:39 No comments: