The Rapper that Caused a Riot (or two)

How does that joke go – something like ‘Good music is like good candy – first you have to throw away the wrapper’. The wrapper – or rapper in this case – being someone called Pablo Hasél.

Pablo (real name Pau Rivadulla Duró) is a ‘political activist’ (Wiki) and is currently in the news for having been finally hauled off to clink from his place of refuge in Lérida university (we imagine him hiding in the airing cupboard). Pablo was convicted of a number of injurious songs and the question of freedom of speech has once again arisen.

His songs (raps) were along the lines of death threats to various important people including the Royals, the military, the bull-fighting community and the Mayor of Lérida, while expressing support for ETA and other revolutionary groups.

Onda Cero has a partial list of his peccadilloes, including several cases of street violence and a total of some seven years worth of prison (currently standing at nine months confirmed).

The words to some of his raps: "Someone stick an ice-pick in José Bono's head."

"Death penalty for pathetic Royal princesses, for spending our money on cosmetic operations".  …and so on.

You can enjoy one of his videos here. 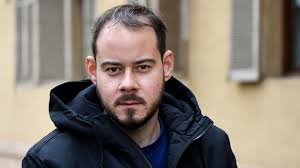 One way or another, this angry young man is now in jail and following this, Spain is in riots (video) with plenty of destruction and a number of arrests. The far-left apparently (maybe with a few provocateurs and common or garden criminals and looters) have been kicking up a major fuss – particularly in Barcelona. The only political party to not condemn these protests is Unidas Podemos, who won’t have attracted any new supporters with this move.

A Facebook button reads (in translation):  Podemos reckons that saying 'Hey Babe, how pretty you look' is a crime, but rapping 'Die you bitch' is freedom of expression.

Pablo though, if he wanted to help (which doesn’t appear to be the case) could send out a message from his jail-cell: ‘Friends, thank you for your support. Now go home’.

After all, it worked for Donald Trump.

The Catalonia Election Results and Reactions 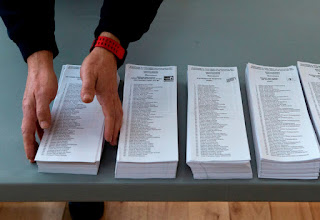 The elections in Catalonia have been held and the results are in: PSC (PSOE) won the most seats with 33, followed closely by two independent parties, the ERC and the Junts per Catalunya, with 33 and 32. After them came the Vox with 11, the independent (and radical) CUP with 9, Podem with 8, Ciudadanos with 6 and the PP with just 3.

Apart from the surprise of the Independent parties winning the majority from the Constitutionalists with 74 to 61 (and the announcement by them earlier last week that they wouldn’t form a government with the PSC come what may), an increase over 2017 of four, there were some other shocks.

The Ciudadanos, the largest party in the 2017 Catalonian regional elections, fell from 36 to just 6, losing 86% of their 2017 voters, although the disappointed party leader Inés Arrimadas said on Monday that she’ll soldier on.

The PP (who claim that they were at a disadvantage with the current crop of corruption cases before the courts in Madrid), fell from last place in 2017 with four to last place this past weekend with just three (technically speaking, as some small parties behind them got no seats at all).

The PSC rose from 17 to 33, which will bring satisfaction to the government in Madrid.

Lastly, Vox went from nowhere to 11, which will bring either elation or deep gloom to many across Spain.

Ciudadanos voters evidently migrated to the PSC or to Vox – but none of them crossed to the PP.

The reaction from the ex-president of the Generalitat Quim Torra (with 51% of the vote supporting the independent parties) was a bit of justifiable hyperbole ‘¡rotunda victoria independentista! – a huge victory for independence!’.

One thing will come out – the number of abstentions. Only 54% voted on Sunday. These will have been partially caused by the pandemic, but it was the courts who insisted on the elections taking place this past Sunday rather than postponing them, as the Generalitat had wanted, until May 30th.

In Madrid, despite the foreseen shock of an Independent win, the Government must be quite pleased. The socialist candidate did well, increasing the party share from 17 to 33 deputies, the Ciudadanos are dead in the water and Pablo Casado is looking very foolish with just three deputies.  But then, could the Catalonian parliamentarians in Madrid – following a fresh pro-independence government in Barcelona – drop their support for the PSOE/Podemos national Government coalition?

Here’s a piece from an old Spanish Shilling, previous to the 2017 election results, which looks at the cost to Spain of the losable treasure of the Independent Catalonian Republic.

Dash it, it’s just so convenient to live there.

Those of us who live in the country are looked after by those who are wiser and better than we – those who, by definition, live in the city.

Here in the country, there’s no bus stop or taxi rank outside our homes, and we may not have fast Internet or a bank within walking distance, but we manage. Our concerns are to do with not paying too much tax, making sure all our sheep are registered and chipped, and hoping that the kids, when they grow up, will take over the business, such as it is, rather than move to the city where all the fun can be found. 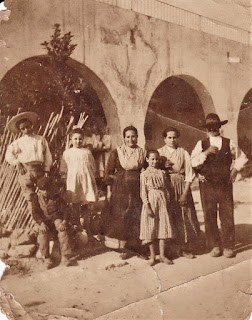 For the city-folk, the countryside is an amusement park, where nothing bad must ever happen. That’s why they’ve now banned the hunting of wolves. That’s why the story of a pack of wild dogs killing 220 sheep has shocked the nation.

We are fondly watched over both by the ecologists (most of whom live on the seventh floor of an apartment block and have never in their lives stayed up late to help an animal give birth) and by the tax-men, who are convinced we are either overcharging the city-folk, or employing ‘illegals’ and pocketing the difference (there may be some truth in this).

While selling tomatoes to the supermarket chain for eighteen cents a kilo.

We are visited, just around election time, by indulgent politicians, who otherwise have forgotten or ignored us.

They often arrive on a tractor wearing a waterproof jacket and rubber boots. The swarm of photographers usually gives them away.  But, we know that when they talk about public services, it’s more metro lines or bike-lanes they mean, not fixing the potholes or bringing fibre-optic or reopening the local school. We need local trains, because what use is a high-speed train when it doesn’t stop in the nearby market town (making it, needless to say, a low-speed train)?

For politicians, ‘Building houses’ means building apartment blocks, not eradicating the shacks where the immigrants live in favour of proper housing. In short, they want to protect ‘the countryside’ without knowing much about it. The wolves and the pheasants are more important to them than we are (once the voting booths are closed).

No wonder Vox, which is very much a huntin’, fishin’ and bullfightin’ party (albeit, a racist one), is doing well in the campo.

Some ideas are suggested by an article called ‘En el campo no se puede votar a Podemos’ here.

Then there’s the footballer called Messi, who was paid, per his 2017 four-year contract with the Barcelona football club (BoT said they were heavily in hock to the banks last week), the alarming sum of 555,237,619€. El Mundo (paywall) has just revealed the figures, which keep the footballer in contract with the club until late June this year; and the ‘indignant’ Lionel Messi has now instructed his team of lawyers to sue the paper for revealing this information. The Argentinean footballer isn’t only annoyed with El Mundo for printing out this outrageous sum (with a photo of the contract), he also wants to find out who spilled the beans within the club management. 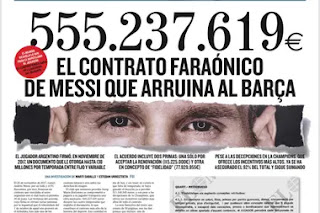 In fact, Messi makes 1,084 times as much as the 350 deputies in the congreso combined.

I think we would find that the footballer makes a lot more than all the deputies in the national governments of the whole of the EU added together. All this just for stripping off his kit now and again and galloping around a field chasing a ball.