The Partido Popular: There Can be Only One

A civil war has broken out in the last 24 hours within the Partido Popular after accusations that the Madrid regional leader (and party darling) Isabel Díaz Ayuso was 'spied on' and accused by Pablo Casado of nepotism - of giving a 1.5m€ contract for surgical masks, while her brother took a juicy commission (from the provider, a childhood friend) – which she denies, well, sort of (‘there’s nothing wrong in that’, she says). The ‘juicy commission’, says Casado, was for 283,000€. 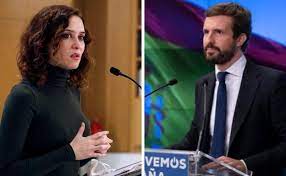 Ayuso reacted to the accusation by publicly berating Pablo Casado and his lieutenant Teodoro García Egea of trying to poison her reputation 'I would never have imagined', she said, 'that the national direction of the party would act in such a cruel and unfair way against me'. In a statement on Friday, Ayuso says her brother has worked in the health sector for more than 26 years and there was nothing improper in his activities. She also showed surprise that she should be attacked by her own party in this way. She further reminded Spaniards that what is needed is a strong PP to rule the country against the ‘disaster’ of the current government. ‘I might make mistakes’, she says, ‘but never illegalities’.

The party leadership has now said that Ayuso will be officially rebuked by the party as 'we won't tolerate any disloyalty'.

Ayuso and Casado are in a struggle at the present time for the popular leadership of the party, with Ayuso apparently being the militants' choice. Casado is meanwhile asking PP mayors and regional leaders to support him publicly. Few are doing so quite yet (although the Almería local paper showed fervent support for Casado on Friday). ‘In times of war’ says one editorial, ‘one must choose a side’. One’s political future could depend on making the right choice…

A modest demonstration on Thursday night outside party headquarters in Madrid showed pro-Ayuso supporters with their ‘Casado out, Ayuso in’ placards. A second one is planned for Sunday.  In a question for the conservative ECD readers – which one do you prefer, Ayuso scored over 96% against Casado with just 2%.

Casado will expel Ayuso from the party (hello, Vox!) if she is proven guilty. We read that the headquarters considers that the historic corruption of past regional Madrid leaders should no longer exist. Ayuso and her followers are more concerned about the spying operation (a senior PP official in the Madrid town hall – and Casado strongman – has already resigned) which, they say, was engineered to dent her popularity.

Imagine! Corruption in the heart of the PP! No wonder they are appalled.

Pablo Casado effectively lost the election in Castilla y Léon, while Ayuso most certainly won the election in the Community of Madrid. Already, the dice are in her favour…

Something not entirely dissimilar had happened in the PSOE a few years ago - with the people's choice Pedro Sánchez winning out over the party apparatchik (Wiki).

*By Monday, things had gotten worse. A quiet meeting on Saturday between Casado and Ayuso ended with Casado dropping his accusations of misdoing against the Madrid leader and Ayuso saying that there was no spying against her after all. Friends again. The Party saved.


The Castilla y León elections duly went forward on Sunday and the results were a victory for the right.

Or maybe, as we shall see, for the far-right.

The Partido Popular rose by two seats to 31 and the PSOE fell by seven to 28. The problem for the PP is that they can no longer count on a partnership with Ciudadanos (which has all but disappeared anyway with just one seat) and must therefore pact with Vox with its 13 seats. Andalucía’s president Juanma Moreno Bonilla will have taken note.

The focus is on Pablo Casado. His plan to push certain regional elections forward in the hope of showing his strength has backfired. His party rival Ayuso won Madrid handily, but the CyL election has driven some PP support towards Vox while other fringe parties have arrived on the stage (the various ‘regionalist’ groups and others took seven seats between them, mainly drained from the PSOE, with ¡Soria Ya! taking 40% of the vote in that province). In short, with hindsight, the election should never have been called.

The Vox leader in the region is 31 year old Juan García-Gallardo, known for his xenophobic and homophobic tweets. Will he be able to calm down and be – as his price for supporting the PP government in Valladolid – a useful vice-president? His two non-negotiable conditions: drop the ‘left-wing’ regional laws on gender violence and the decree on historic memory (to do with revealing excesses from the Franco regime). No call by Vox, it says here, for something a bit more practical – like more schoolteachers or doctors, or better roads or working conditions for farmers…

A poisoned chalice indeed. As we read here: ‘Sr Casado, you may now kiss the bride’.

With Vox finally in government as an acceptable partner of the PP, will those who stay at home on the left continue to do so in future elections?

About the only other choice for Mañueco is a minority government, with the other parties called on as necessary for specific points (on a quid pro quo basis, no doubt). Or maybe – ah… fresh elections?