The bet was that the hot summer would kill off the flu-like viral infection that was coming from the Orient to besiege Spain back in March this year.

The summer heat didn't disappoint either, with record-breaking temperatures to roast us, but the virus, having had a first wave that obliged us to stay inside for three months over the springtime, with Easter a bust, has returned with vigour for the summer-season. It likes heat, maybe.

Perhaps the initial sacrifice of staying home, avoiding the bars, losing (or furloughing) jobs, and buying crates of flour and lavatory paper proved too much. The economy must survive, said the bankers from their generally rather larger homes than those enjoyed by the masses. The tourists must come and keep our hotels full said the hoteliers. The Government, said the right-wing, doesn't have a clue. The tourists were allowed in from abroad, although not so many came. Domestic tourism made up some of the loss, but the visitors brought with them and mixed up the infection rates. Clubbers began to fall ill.

Now, with the tourist season proved to be largely a bust, with the end of the summer in sight and no reliable answers to the pandemic, we are again warned of another lockdown. With it (or indeed without it) the economy is facing a challenge. Expect a massive recession, lost jobs and, sooner-or-later, a far-right government to tell us th 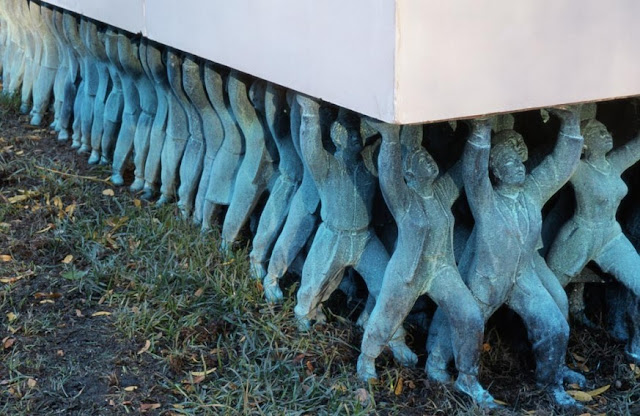 at it was all the fault of the foreigners, the Jews, the coloured and the homosexuals.

These are short-term views and worries of a probable long-term situation. Tourism, as we know it, is dead for a long-time to come. Hotels cannot run on 25% occupancy, and neither can bars and restaurants. The question isn't when will they close, but will they ever re-open again sometime in the future?

People have discovered that they need no longer pay high city-rents, if they can work from home with a good broadband connection and use Zoom for conferences.

Office blocks - and their denizens - are becoming a thing of the past. Why not pay far less for a home in a small pueblo, with a garden and clean air, if you don't need to live and work in the city. Forget the shopping malls, you use Amazon anyway. Leave the dismal streets to the pan-handlers and the graffiti-artists.

Between the loss of business-rentals and ownership, as the unwilling banks take back more properties and try and accidentally burn down the odd skyscraper here and there for the insurance, coupled to the drop in tourism (why go out when the discos, theatres and cinemas are all shut?), the only bright light is the small and until now forgotten pueblos that make up most of Spain. They can be filled by well-healed residents who either work from home, or have a good pension.

To think that this extraordinary crisis is a short-term imposition is a mistake. The Corona - and maybe some others - will be around for a long time to come. Life won't ever again be the same as it was.  Go get some more lavatory paper while you still can!

It's an improbable story - how an unknown stringer from the Euro Weekly News received two parliamentarians who told him (exclusively) that Spain was planning a lockdown six weeks hence. The article then says that  '...The two Spanish members of congress also revealed to the Euro Weekly News on Saturday that talks have taken place with other nations prime ministers advising of the set-out plan including UK’s Boris Johnson...'.

Following the panic that the article understandably caused among readers of the weekly, a second article appeared from the same writer, one Alistair Pike, saying '...After the Euro Weekly News published a factual article in regards a conversation between a reporter and two government ministers, that described how plans were being put in place in the event, that if coronavirus figures in Spain continue to escalate, social media has gone into meltdown.
The article headline clearly states Spain is set to go into lockdown phases if the coronavirus continues to spread across Spain...'.

The second article was also critical of the police-run Facebook N332 which had said in turn: '...There is NO OFFICIAL CONFIRMATION from the Spanish Government yet about a new ‘lockdown’ at all...'.

Other sites which have featured the story:

The Olive Press headline was: 'British Embassy unaware of any plans for second lockdown in Spain after article causes mas confusion among expats'.

The Global247News (weird site) here: 'Spain’s going back into LOCKDOWN on Friday September 18th'. It includes some reactions from local residents (yet was posted only one hour after the EWN original).

Later, the fake-news watchdog Maldita Bulo came out with ¿Qué sabemos sobre un supuesto plan del Gobierno para retomar el confinamiento el 18 de septiembre? What do we know about an alleged government plan to resume confinement on September 18? Journalists from the site checked with the Ministerio de Sanidad who say that 'they don't enter into foretelling the future'. Two other sites that expose fake news, Salud sin Bulos here and Newtral here both throw cold water on the story.

The Dutch Spanje Vandaag said on Tuesday 'Engelstalig Fake news over lockdown vanaf 18 september in Spanje' which is easy enough to translate.

A YouTube feature in Spanish here explains the article, doubtfully.

The EWN piece received numerous comments of all descriptions on many different Facebook threads. Some were enthusiastic, others called it 'fake news' and others still were disappointed and talked of cancelling or rescheduling their holidays. One said, 'I cannot believe a government would be issuing a statement on what it is going to be doing in .....6 weeks time!'.

From the same plucky journalist, Alistair Pike, who from his desk in the Euro Weekly News building has been (apparently regularly) in contact 'with the Spanish Government', we read on August 11th:

'The Spanish government in Spain’s Madrid (heh!) have issued a “no further comment” in relation to potential lockdown claims in Spain.
Spain’s government have been in direct dialogue with the Euro Weekly News for the last 48 hours, as we pushed them on answers, as they wish to deny a previous article...'. But then the article gets a little silly... including this gem: '...Finally, would it be possible to have an interview with Prime Minister Mr Pedro Sanchez where he can let us know his plans and we can relay them to the large expat population in Spain?' .

The EWN's Facebook page (tragically, I've been banned) features the story with some comments, including this one: 'Sod off! Not fake news!'.

Alarmingly (as the story failed to appear in Thursday's print edition of the EWN), the Government became testy. 'I am aware of this bulo, but we will always do as we think best'. El Huff Post here.

The (last) word goes to the Euro Weekly News: