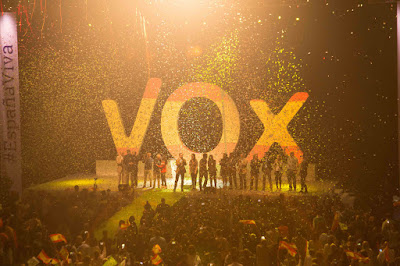 Vox rules as a kingmaker in Murcia. When the party brought the PP into power last May you could hear a pin drop. However, something it’s doing there is bringing the right-wing group enormous popularity across Spain; indeed, a current poll from one source, SocioMétrica, has Vox at a sharp rise in voter-support (bringing them, as it were, from 52 deputies up to 60). The other main parties are stagnant, or falling.
Vox is a simplistic party, more ‘against’ than ‘for’, and their new strategy in Murcia is to introduce ‘the parental pin’ whereby parents can excuse their children from certain subjects taught in the school system which ‘go against their moral principles’ with a simple note to the teacher.
The first and obvious one being sex education.
In my day, the head master would call you from class (amongst titters from the other boys) and lecture you in a dry voice regarding the wonders of sex, with the never-forgotten opening line ‘you may have noticed a tassel-like thing...’.  Well, you know, ¡Ay, los ingleses!...
Indeed, I had noticed the tassel-like thing, and it would become a source of much joy in the years to come.
Now, we have hard and improbable porn on the Internet, and any sex education must first of all remove the exaggerations of this industry as much as inform and take away the fears and the doubts of a child’s future sexuality. Homophobia, the violence or distaste towards other sexual preferences, are also a taboo subject for Vox and other ‘parental pin’ supporters, who often resort to bulos (false news or transplanted videos) to make their point.
Spain nevertheless, and despite old-fashioned viewpoints and ‘mariconadas’, is ‘...among world's best for gender equality...’ (here).
The current Spanish curriculum was introduced by the education minister for the previous government of Mariano Rajoy (Juan Ignacio Wert), and it is no big surprise that Pablo Casado supports the Vox initiative over his own party’s erstwhile education overhaul from 2012. “I don’t believe in a country where parents have to be subject to the whims of what a politician or bureaucrat says,” Casado said on Monday, disparaging the teachers’ sterling efforts for a good education for their students. Spain’s new equalities minister, Irene Montero, described the measure as an attempt at educational censorship (Quotes here are taken from The Guardian). An (apparent) message from The Pope to the effect that children are our responsibility but not our possession has become popular in the social media by lefties. It’s a subject which puts people head to head (and that could well be the foremost policy of Vox).
The government delegate for gender violence, Victoria Rosell, suggested that the introduction of the parental pin could warrant the application of Article 155 of the Spanish Constitution (the one they are always threatening to use against Catalonia – the suspension of regional powers, no less) although she later said it was a joke.
Murcia is not usually noted as a major player in Spanish politics, but the attractions of an old-fashioned education have always been popular in certain circles (‘spare the rod and spoil the child’, or ‘ahorre la vara y mime al niño’  in Spanish) and, despite the Government now ordering Murcia to drop the suppressive rule within a month, calls for a parental pin could find its way to Madrid or other regions with a strong Vox presence in the government or support in the street.
Posted by Lenox at 13:47 No comments:

Spain has a Government 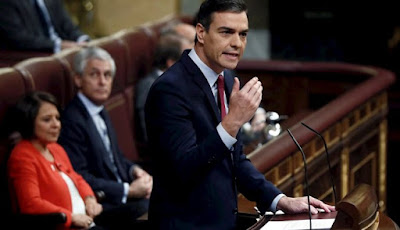 Finally on Tuesday, in a second round, Spain’s parliament chose Socialist leader Pedro Sánchez to form a new government, ending almost a year of political limbo for the euro-zone’s fourth-largest economy. The vote was impossibly tight, with Sánchez and his coalition partner from Unidas Podemos Pablo Iglesias taking 167 votes against 165, with 18 abstentions.
Much of the rhetoric and the pressure concerned the issue of the Catalonian call for independence, which we are told elsewhere is a minority view in the region. The right-wing parties in Spain (including the ‘centrist’ Ciudadanos) are intent on applying ‘Article 155’ – direct rule from Madrid – on the region, and their hostility against Sánchez was apparent as he was obliged to persuade the ERC to abstain. (Ciudadanos could have removed the Catalonian problem by themselves abstaining, but that’s politics).
During the weekend’s intemperate first investiture debate, the PP leader Pablo Casado branded Sánchez as a ‘sociopath’. The Vox leader Santiago Abascal wasn’t any friendlier, calling Sánchez a ‘traitor’ (here).
From The Guardian here: ‘...The PSOE and Unidas Podemos have promised their joint government will increase the minimum wage, raise taxes on higher earners and big companies, and overhaul some of the labour changes introduced eight years ago when the conservative People’s party (PP) was in power...’. From The Corner comes the balanced review ‘The new all or nothing government for Spain’ here.
‘Sánchez also had a message for the opposition parties that have been questioning the legitimacy of the coalition government. “The first principal of a democracy is to accept the result at the polls,” he said. “There are only two options: a progressive coalition or more deadlock for Spain.”’.
From El País in English: ‘What can he push through parliament?’ It says, ‘Sánchez’ term in office is likely to come under all kinds of threats, right from the first days. The two-part investiture debate that took place over the weekend and concluded on Tuesday has only confirmed fears of a highly charged atmosphere in Spain’s lower house of parliament going forward...’.
The program includes tax-hikes for the wealthy (a professional who earns 12,000€ a month is unlikely to take off for the Bahamas because he’ll be paying an extra 20€, says the ElDiario.es here while LibreMercado calls it ‘the highest tax hikes in living history’).
The pressure on the PSOE (or one of the satellite parties such as Teruel Existe: ‘there’s no chance of me changing my vote’) to find a chink in their armour, someone who was prepared to break rank and vote against Sánchez for president, was tremendous (here and here).  Indeed, the Coalición Canaria leader Ana Oramas finally defied her party’s decision to abstain (for reasons best known to herself) and voted against Sánchez.
What is terrifying (frankly) for the conservatives, industry and the church is the prospect of the first ministers from outside the PP/PSOE machine – five of them, no less, from Unidas Podemos:  Pablo Iglesias (vice-president), together with Irene Montero, Yolanda Díaz, Alberto Garzón (the IU leader) and Manuel Castells.
The thing is, if this wobbly coalition falls under its own weight of improbability, the fractious right will take the country and rule for a long time to come.
Posted by Lenox at 02:32 No comments: 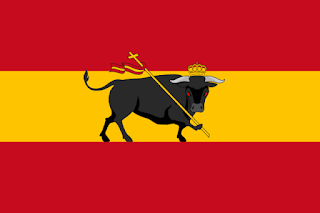 In some far-off country, where the scars of the Civil War have been all but forgotten, a monster wakes. As happens in many other lands, the foreigners are chosen to shoulder the blame of all that has gone wrong for the poor (and the poorly educated). The foreigners take people's jobs (yet, at the same time, they are accused of living off unemployment and government handouts), they take our women and, look you, the crafty out-landers even stay open on Sundays.
Well, foreigners is a broad term: gypsies, blacks and Muslims, homosexuals and Jews, South Americans and transsexuals; plus in the case of that particular far-off country, the neighbours in the top right corner: the Catalonians.
The Nazis called all of their particular hate-groups: untermenschen. A term which diminishes them: sub-humans.
Simple answers to complex problems. Vox is born and within a short time becomes the third largest party in Spain's parliament. It talks of coup d'états (uh, we remember Franco's coup in 1936 and how that turned out, but they are thinking of something else) and of the 'Marxist threat' against the Motherland, and art the same time it encourages nationalism and flag-worship. Hatred triumphs over sanity and mutual respect.
In short, you can't have an us without a them.
A site called Maldito Bulo lists some of the bogus claims made by the far-right which are often found in the social media (the foreign children living on 2,000€ a month of tax-payers' money kind of thing) or printed up by the more inventive news-sites.
People ill-trained in logic believe this crap, and vote accordingly.
A leading black-shirt in 1950's Britain (a country where racism is sadly in ascendency) told my father that they didn't want intellectuals in their party, nor aristocrats, blacks, Jews, homosexuals and so on; instead they wanted 'the little people' to take their deserved place at the table - if down there somewhere below the salt.
In Spain there are lots of foreigners (we won't include the fifth columnist Catalonians, Basques, homosexuals and Marxists here), with somewhere around 10% of the entire population having been born elsewhere (4,720,000 in 2018).
Vox and its allies would have us blame them, hate them, imprison them and deport them.
Posted by Lenox at 04:20 1 comment: