This time, they jailed me for another month after putting a frivolous comment on a Spectrum post about the new proposal to double-pack passengers on a flight. 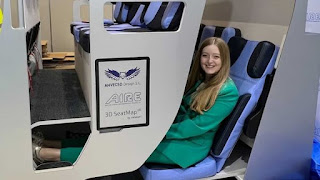 I wrote: 'Why not knock them unconscious and stack them in the hold'.  Pathetic perhaps, but hardly revolutionary.

The Thought Police were quick on the uptake and gave me another month to cool my heels (I had just got out that day from an earlier and equally stupid sentence).

Facebook - where one isn't even allowed the luxury of a kangaroo court. Where the power to close one down is evidently in the hands of faceless gnomes.

It raises the question - are they really watching us, or is there a filter that catches the key words like 'unconscious', or do people with a loose understanding of the word 'fair' routinely report their rivals (apparently one can)?

Facebook takes my money for promoting a site of mine called 'Business over Tapas', that I can't even visit.

Indeed, I'm currently barred from putting as much as a 'like' on a post, and friends don't know I've been removed from all activity because I can't tell them. For that matter, I am not permitted to send even a 'like', much less a heart emoji, to a birthday friend.

It's a pity because, having been in desktop-publishing most of my life, I enjoyed seeing and posting on Facebook. I no doubt spent far too much time looking at it on the cell-phone (the average time spent on social media by those who use it, says Statista, is over two hours a day).

Me and Donald Trump both!

Still, with all this free time I now have, I can do all sorts of other things to fill my day.
Dig a hole, maybe.