Now That's What I Call Closed

The banks here are merging, fusing, joining up, buying each other out and, in general, the number of different 'entities' is going down from 45 cajas de ahorro (savings banks) and a dozen banks just a decade ago to roughly, with ink from the latest mergers still wet, just four or five today.

They don't treat you well, either, these new banks. They are looking for the huge deals, not the pensioner with his fifty euros withdrawal. Since there is so little choice, they can charge you even for taking money out of your (non-interest-paying) current account. You probably won't even get to talk to the cashier, because there isn't one any more. In the last decade, over 110,000 jobs have been lost in the banking sector. Well, 'lost' as in 'fired'. The banks are keener than ever on the bottom line, and it ain't 'customer service'.

Dwelling on this and other changes in our lives, I went for my morning constitutional down towards the local pueblo, an ugly town of 9,000 inhabitants which, while on the coast, has no hotels, no souvenir shops, no discotheques, no foreign urbanisations with their charity shops and Burns Night and, best of all, no tourists. There's a narrow high street with no room for parking yet a fulsome number of cars double-parked with the consequent lack of fluid movement, a couple of Moorish butchers and a number of cafés that open at five or six in the morning and then close for lunch. This seems to be such an extended meal that they won't open again until the following day.

My walk took about half an hour, first through the campo and then into the pueblo itself. I was desirous of making a small withdrawal from my bank - one of those that's still going -  and was wondering if there would be time for a coffee before my preferred bar closed for the day. Despite wearing a mask and emitting a gentle wheeze, I was feeling quite refreshed. 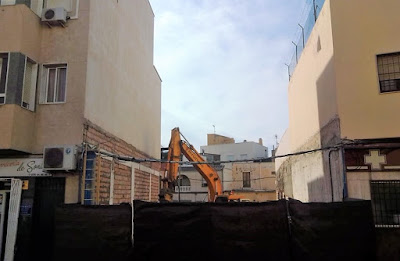 As the picture shows, the bank - she ain't no more Mister. As the Spanish say, that place is not just closed, it's desaparecido.

Paperwork for the Foreign Petitioner

Besides that sprinkling of Europeans looking to get their residence papers, or the new TIE card, the majority of those people in the queue outside the Police extranjería are from other parts of the planet.

Notably in regions with agriculture workers, like Almería, Cádiz and Murcia, or builders (Madrid and Catalonia).

The system is ‘first at the door’, but it doesn’t always work like that. You see, the sign outside says ‘Full, come back tomorrow’. Even if you got there precisely at 8.00am.

Of course, there are several ways to skin a cat. In Almería, one needs to pay some handy fellow 200 euros to get in. In Madrid, it’s the same, and in Catalonia (of course) it’ll cost you 300€. 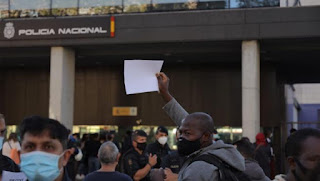 Who shares this money? Well, it’s clear that someone in authority would have to turn a blind eye. But, hey, foreigners don’t have the vote, or representation or a champion…

Maybe one can find a ‘reservation’ through some cheesy agency, or with Wallapop (here) or Mil Anuncios (here and here). Antena3 runs a segment about this (found on YouTube here).

It goes without saying that the foreigners, los extranjeros, are sick of this. ‘Migrant groups protest at a police station in Barcelona due to the lack of appointments to regularize their situation’ says 20 Minutos here. If they don’t get their NIE renewed in time, it says, they could lose it altogether.

From Para Inmigrantes here, we read (Oct 2019) ‘Reservations in "re-sale" for appointments at the Immigration office.  Obtaining an appointment at Immigration is of vital importance for immigrants. However, getting a ‘number’ has been almost impossible for a while now. The damage for those interested is major: "Without an appointment, there are no papers. Without papers there is no formal job, no bank account, no rent. There is no tranquillity". It says that many people resort to locutorios (the small phone agencies that are found in working-class areas) where they can pay up to 300€ for an assignment.

El Mundo looks at the other issues for third-worlders: ‘…Gathering the necessary paperwork at the place of origin, receiving them after a few months and preparing them (or translating them, if it is not a Hispanic country) can cost more than 1,000 euros. In addition, there are the bribes that some officials of those countries demand for their role, say citizens of Pakistan and Senegal. The whole effort can be wasted if the supplicant can’t get a date and time over at Extranjería before the paperwork is timed out…’.

El País (July 11 2020) also reports on this here: ‘The collapse of the police stations blocks the procedures of foreign citizens. With thousands of pending procedures and the limited capacity to manage them, the pre-appointment business is booming again and they are sold in offices, call centres or Wallapop for up to 200 euros…’.

Between the Covid making appointments harder, and the long queues, and now the mafia, it’s a struggle to get one’s bureaucratic obligations resolved these days…

Politics and The Establishment 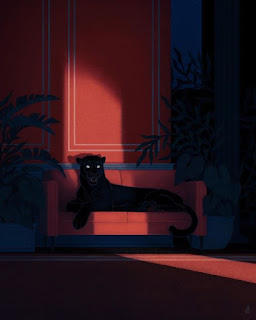 Spain has a political system which allows opportunity. From the most humble councillor in the town hall (well, in the local government, that is) to the very top, there is opportunity. One can make use of it or not, as each and every politician must decide.

Many did, and that led to the eventual fall of the last conservative government: for corrupción!

The famous mantra of ‘…y tú más’, which translates as something like ‘Oh yea? and what about your guys?’  was shattered with the rise of Pedro Sánchez (one recalls how the PSOE apparatus of the time did all it could to get rid of him) and, to the far-left, the arrival of Podemos with Pablo Iglesias.

Neither of these two is well seen by the Spanish Establishment. Business – and opportunity – is not best served.

From this comes the continuous plots and ferocious political opposition.

This time though, the electorate is more attuned to the manipulation of the media.

In short, their enemies do all they can to find some dirt on either Pedro or Pablo, whose fame rests to a large degree on their integrity, knowing that any sign of having feet of clay will topple them. And for this, the right-wing, much of the judiciary, the media and big business look under every stone and in every sewer, as they seek to manufacture some scandal that would stick, above all in the eyes of the voters.