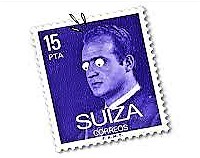 ‘No one is above the law’ goes the platitude but, if the law doesn’t always like to tune in, then face may be saved and propriety maintained, but nobody is fooled and the system itself is weakened.

So much the better if those we look up to avoid returning the favour by looking down on us.

In the old days, we had ‘the Divine Right’ which pretty much allowed kings and dictators to do whatever they wanted, with God’s blessing and approval. In the UK, Cromwell put a major dent in this, and here in Spain, the Second Republic saw the Bourbons (wiki) leave into exile in 1931, to return (following Franco) in 1975.

Juan Carlos I (wiki) was a popular choice for the new Head of State (as far as anything created by Franco can be said to be popular in these Modern Times) and, by failing to support Guardia Civil Lieutenant Colonel Antonio Tejero’s fascist coup in 1981, his approval was assured.

But, things have gone downhill for the monarch, not only precipitously succeeded while still alive by his (admirable) son Felipe, but now living under a cloud in exile in (of all places) Abu Dhabi.

We join the press clippings:

‘It has just been learned that the prosecution plans to archive the investigation on the emeritus king and that as a consequence he is already thinking of returning to Spain, although not permanently, but only for a visit, so as not to hinder the work of his son, the current King Felipe VI…’ says an opinion piece by Gaspar Llamazares titled ‘A sense of outrageous impunity’ at the left-wing Nueva Tribuna here.

El Confidencial says that, with the Emeritus escaping any inquiry into his business dealings and activities overseas, those who helped facilitate them – lawyers, accountants, bankers and agents – will breathe a sigh of relief, as they won’t be judged in open court either.

In the unlikely event of a referendum in Spain on the Monarchy, says El Salto here, 39% of the population would vote ‘Republic’ against 31% ‘Monarchy’.

Meanwhile, as Juan Carlos I (and Prince Andrew here and maybe Donald Trump here) are protected from a full and proper enquiry, the losers are the very democracies they represent.

The Pandora Papers is a giant hack of information – around twelve million archives – about offshore accounts and the wealthy people who hold them. Those who could be said to be most responsible for contributing towards the improvement of our lives by paying their share in taxes, and failing to do so. Some of the accounts revealed by the leak had previously been closed for one reason or another, but many others remain open.

We read of three current presidents and eleven past presidents from Latin America. We read of some world leaders – such as the Czech Prime Minister Andrej Babis and the King of Jordan, together with former associates of both Pakistani Prime Minister Imran Khan and Russian President Vladimir Putin… 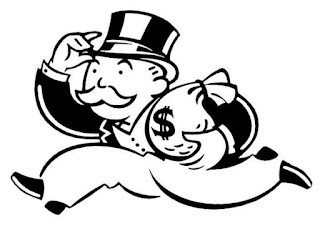 Sometimes even saints are sinners, as we learn that Los Legionarios de Cristo also have (or at least had) a nice little nest egg of 295 million euros quietly stashed offshore.

The investigation comes from the International Consortium of Investigative Journalists which says in its feature titled ‘Offshore havens and hidden riches of world leaders and billionaires exposed in an unprecedented leak’ that ‘The Pandora Papers reveal the inner workings of a shadow economy that benefits the wealthy and well-connected at the expense of everyone else’, and, between one thing and another, that some US$11,300,000,000 are hidden under a rock (equivalent to nine times the GDP of Spain, for example).

“The new data leak must be a wake-up call,” said Sven Giegold, a Green party lawmaker in the European Parliament. “Global tax evasion fuels global inequality. We need to expand and sharpen the countermeasures now.”

In Spain, the primary information is being handled by El País and LaSexta.  Thus, we read about Corinna Larsen, Miguel Bosé, Pep Guardiola, Julio Iglesias (more on him here) and, in El País, we look forward to reading more about ‘the opaque business of 600 Spaniards and some 750 offshore companies linked to Spanish interests’.

Not that things end there. In Spain, the 216 companies that invoice more than 1,000 million euros a year pay (in practice, not in theory) a 5.47% tax on their profit. This is up to four times less than the usual tax paid by the ordinary small and medium-sized companies’.

The Tourist Season is Over

Since 1980, the United Nations World Tourism Organization has celebrated World Tourism Day with an international observance on September 27.

We suspect that the date comes from when, in a Good Year (without bombs, disease, civil unrest or a better offer from Turkey), the tourists have filled up the souvenir shops and hotels with credit card transfers, and by now have largely gone home again.

Oddly, we don't have a Residents Day, when the Residents are honoured for spending their money all year long. 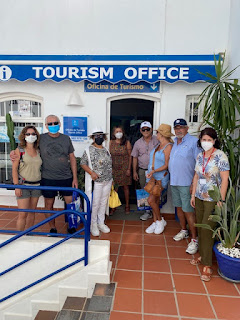 Our calculation is that just one resident is worth to Spain the equivalent of one hundred tourists (we buy a house, a car, pay taxes and drink and eat all year long). We also try not to be sick in the neighbour’s garden or stay up until five in the morning singing boisterously (good word, that!).

So, ten thousand of us, no more, would be worth a million tourists, yet take up a lot less space in the village fiesta.

Most of our money comes from outside Spain and, between one thing and another, we take few jobs away from the Spaniards.

The thing is, we don't spend our money in souvenir shops, or in all-inclusive hotels. Which is why the subject of the foreign residents is largely ignored.

So how much effort does Spain spend on attracting full-time residents?

Is there a department, a ministry, a budget?

Away From It All (with olives)

We were out in the campo near Tabernas, the town famous for its cowboy films, desert settings and those folk who wish to get away from it all (while still being only 45 minutes from an airport). 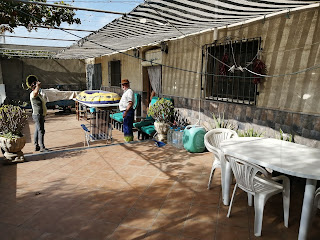 Tabernas is hot in the summer, but nice now we are in late September. Our friend was showing us his house and olive plantation.

The place is for sale since he and his wife are getting too old to look after the 575 olive trees. The finca is on two hectares and has a balsa - a water-tank, with 19 hours fill every ten days. He also has his own well and a pump. Water is a problem in the desert. Roberto is well-prepared. 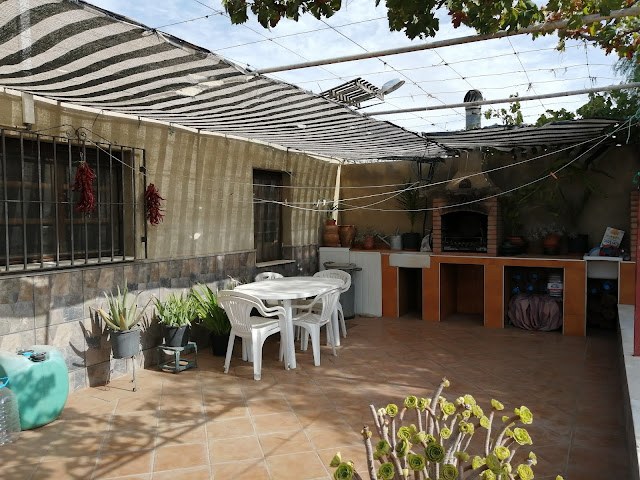 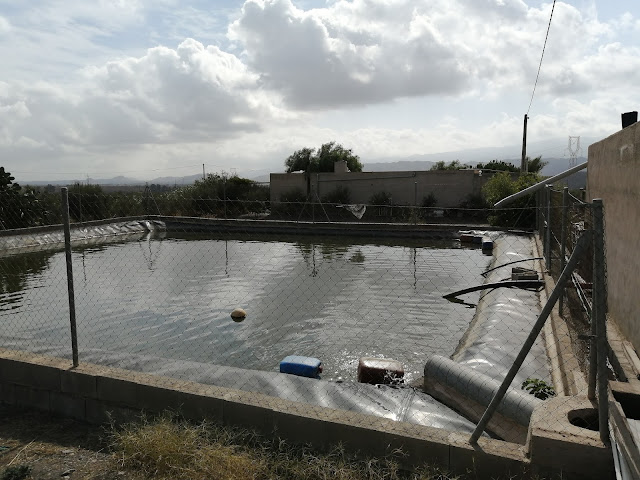 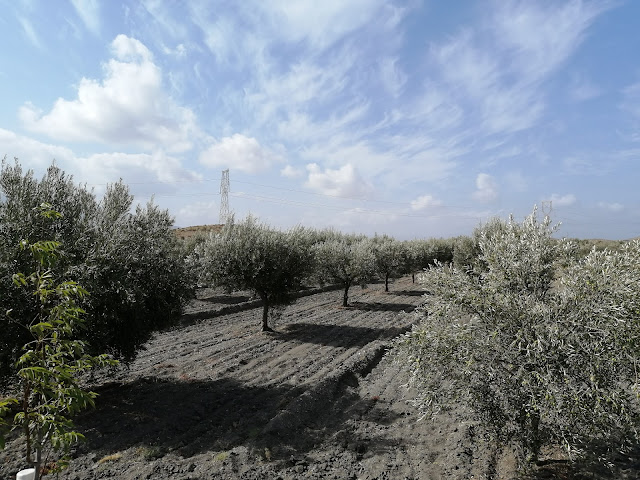 There are sundry out-buildings and the house is 100m2 with three bedrooms, a sitting room / kitchen and a walk-in garage.  A small bathroom and a large terrace round out the living arrangements.

Jeepers! Head for the Hills!

The American embassy has sent out a warning: ‘News media report volcanic eruptions have occurred in La Palma, Canary Islands. Evacuations are underway in Cabeza de Vaca and El Paraiso. There are reports of ensuing forest fires as well. U.S. citizens are advised to monitor local news and government websites for detailed information, including precautions to take and possible evacuation instructions’.

The Canary Islands are a long way from the Spanish mainland, being in the Atlantic Ocean some 600kms off the Western Sahara. In the improbable event that the eruptions turn the island of Palma into an explosive Karakatoa, the resulting tsunami (says a concerned article at the NZ Herald), where ‘…anywhere between 150 and 500 cubic kilometres of rock could slide into the ocean at 100 metres per second...', adding that 'the immense force caused by such a landslide would generate huge waves, hundreds of metres high, that would spread across the Atlantic and hit the coast of the Americas at heights of up to 25 metres…’.

Equally more concerned with the American East Coast than elsewhere, a 2008 clip from The BBC on YouTube explains what could – conceivably – happen. Another (better) hair-raising video from Naked Science with the notable quote ‘…It’s a new-born baby island, barely passed its four millionth birthday…’ can be seen on YouTube here. Both British-made documentaries – are more concerned with the US than with Europe (or even the UK). Even the ABC is more worried about Manhattan than Cádiz.

Shades of Hollywood’s Roland Emmerich and his disaster film '2012'. 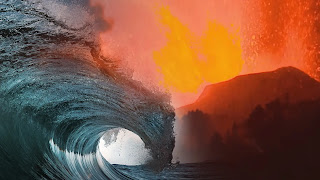 The tidal wave reaching Spain – at least the Atlantic coast, would apparently be less severe and the tight entrance into the Mediterranean would stop anything much more than a heavy sea rising a few metres inland.

Volcanic eruptions are quite rare and can be dangerous – as the good people of Pompeii found out – briefly – to their cost (although the current tremblers in Yellowstone could herald something better described as catastrophic). However, Spanish volcanologists say the chance of such a scenario is infinitesimal. The Olive Press also looks at the rank improbability of a mega-tsunami here.

In all, the likelihood is that the Palma eruption could continue for some time and, as the TV whimsically noted on Monday, the lava flowing into the sea will fortuitously cause the island to grow in size (!).

We read in El País in English that ‘The president of the island council, Mariano Hernández Zapata, called the scene ‘devastating’ given that the molten rock ‘is literally eating up the houses, infrastructure and crops’ on its path toward the coast’.

As the island of La Palma – really just a small portion of it – is in eruption, and everyone who lives or in holidaying nearby are hurrying across the hills to catch a glimpse of the treat (except of course the Americans), the President of Spain passed up a formal visit to the UN to meet instead with the startled neighbours while the Minister of Tourism is looking into the possibilities of making the new volcano a tourist attraction.

Not that it’s necessarily happening at all, mind – some negacionistas reckon it’s a fake.

Goodness, there’s another row between the Daily Express and the EU. On this occasion, the Spanish – at the very least – have said that those Brits living in Spain, as we delicately put it on Facebook, ‘under the radar’ – that’s to say, without the appropriate paperwork – will be summarily ejected from the country when discovered.

If we might assume that this will be the case for all of the EU-27, not such a leap perhaps, then there will soon be quite a large number of tearful Brits waiting on the quayside for one of London’s fine destroyers to dock.

One can imagine the call from the captain: ‘Form an orderly queue please (they already had, of course). You can bring with you one small suitcase, no pets and no foreign companions’.

Bickering between themselves as to whether they were expats (or exexpats) or rather immigrants, the deported Brits shuffle slowly forward to the gangplank.

‘I suppose this is all to do with Brexit’, says one redundantly. 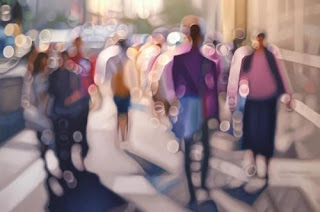 The problem doesn’t end there.

As they disembark at the other end, in some British port far away from the eyes of the press, they will wonder what will become of them. This isn’t a re-run of Dunkirk – nobody in the UK wants anything to do with this.

Neither their relatives, anxious about the spare-bedroom and the drinking problem, nor the Home Office who might wonder if they were in any way responsible for the 200,000 or so refugees who would be preparing themselves, in that British way we have, into making a fuss.

The UK is not the same as GB, as any number-plate enthusiast can tell you, because now it’s just another foreign country.