The British consul for Andalucía and the Canary Isles visited Mojácar this Thursday to participate in a presentation regarding what will (might) happen to the Brits living in Spain post-Brexit.
With Charmaine Arbouin was the VP for Brexpats in Spain, Richard Hill, the Mayoress of Mojácar Rosmari Cano and some legal advisors including the Honorary British vice-consul for Almería Ignacio Pellicer and local lawyer Michael Davies (both helping the Brexpats in Spain association). Lucas Mayo, the Mojácar councillor for foreign residents relations, was also there.
Around 150 British residents were present at the meeting which took place at the Centro de Usos Multiples at the Fuente.
A guest-representative from the INE office in Almería called Javier began, warning us that without being fully registered at extranjería as residents (the padrón is not enough), we would not be afforded whatever rights we might expect following Brexit.  'You will need', he said, 'not just an NIE number, but also a green registration card - a certificado de residencia (what in happier times used to be a residence card)'. The mayoress had previously noted that in the case of Mojácar, there are 6,400 citizens on the padrón of which 1,922 are British. Javier added that, according to his information, only around 700 Britons from Mojácar are properly registered with extranjería.
Those that aren't can expect problems to arise when Brexit is finally implemented.
Charmaine Arbouin also warned us to be fully legal in Spain by at least March 2020, but better before March 2019, when, the 'Brexit Implementation Period' begins. She was unsure as to how many Britons live in the EU - probably no one knows. But, as a representative of Her Majesty the Queen, 'somewhere between one point two and two million' seemed to be a little vague.
The Brexit, she said, 'may have scuppered your plans', but she expected 'reciprocate agreements' between Brussels (or Madrid) and London regarding visas, health, pensions, British children born in the EU and so on - these, she claimed 'will broadly remain the same as long as you are properly registered'. She advised us to 'keep informed' through Brexpats in Spain or other similar groups.
Javier was leaving, so I asked him if we would still be able to vote in next May's local elections. He said - 'yes, or at least, until we are told different by the Ministry of the Interior'.  Those who are registering on the padrón in Mojácar or elsewhere are advised to ask the clerk to be registered to vote (a separate paper). Javier also confirmed that you need to be on the voters' registry at least six months before you can vote.
Richard from Brexpats in Spain reminded us that 'politicians only represent the interests of those people who have the vote - otherwise they won't bother'. Most local authorities have apparently asked the Ministry of the Interior for a continuance of voting rights for the British post-Brexit (I doubt whether Mojácar has - sorry!). he also recommended us to join Brexpats in Spain as more supporters means more weight.
When will Spain consider us to be 'non-EU citizens'? Apparently, we shall be told in October.
Was it a useful meeting...? Not really, despite the fear of scaremongering and the complementary error of complacency.

When? Let's Start with 'When?'

This Brexit stuff is getting interesting.
The British Government appear determined to continue with this idiocy, but, having buggered the whole thing up so thoroughly, they now want more time. We could even remain within the European Union for some years to come - indeed, until long after the next local elections in Spain (May 2019).
Thus, despite my own pueblo's lack of interest in gathering the paperwork for resident foreigners to register to vote, we Brits could still be able to legally participate in local politics for another season.
When the UK does finally sign out, then our councillors and perhaps even our votes will be rendered invalid by the Spanish election authority (even though it's already informally gone ahead and crossed us out).
More interesting perhaps is the forthcoming rules about the change in our status here in Spain (or the rest of the EU27). Will we - as Third Class foreigners - have medical care, visas, work permits, financial limits, foreign accounts, travel restrictions and voting rights?
Who knows.
Who knows indeed. We still don't know who will be responsible for this - a central authority from Brussels or perhaps national rules imposed from the different European interior ministries.
As we approach the February 28th 2019 deadline (which may or may not be malleable), we ask - who knows what will happen, or rather, who knows who will be chosen to not know what may or may not be happening, maybe?
The one thing that the UK and the EU agree on, is that no one is at all interested in the millions of citizens unwillingly involved in this debacle.
Shit, no one even knows how many Brits are living in Europe, or cares.
The European Union and the British departure was, after all, always about the money, never the people.
Posted by Lenox at 00:12 No comments:

As we dance, prance and totter around Mojácar during the magnificent Moors and Christians festival, which began thirty years ago in 1988 to remember the Fall of Mojácar ('peaceful transfer of power') from one régime to another, a second important anniversary is upon us.
Twenty five years ago this week, the Elders of the town decided it was time to 'twin' with another city elsewhere. Perhaps, back in 1993, with the first flush of international tourism upon us, the swollen population of Britons living locally and the opportunity to travel abroad at a reduced and subsidised rate, they might have gone for Henley-on-Thames, or maybe Southend or perhaps Brighton.
The children could have perfected their English, as the Good People of Brighton swapped their brood with their Mojaquero colleagues for a fortnight. The wealthy Henlyans might have bought some decent houses here (in those days, unfortunately, we were only building small apartments - there's more profit in them, even if the dwellers are poorer and short-term).
At any rate, and no doubt after much Discussion, we chose to twin with a town in Andorra called Encamps ('Encamp' in Catalán). Andorra is a fascinating place, in many ways, it's a sort of Spanish Gibraltar. Encamps itself is a charming resort with good skiing, lots of shops,a population of 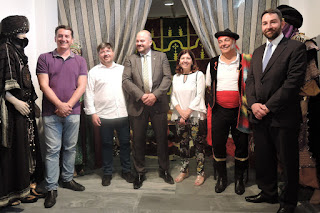 13,000 souls and fourteen banks. Not much to do with Mojácar you might think, but did I mention the banks?
Every year a bus-load of visitors head north, their bank-books firmly held, to enjoy the attractions of the local restaurant and hostal. It's all quite convivial and works both ways as look, in our photo, there's some of the Encamps people here in Mojácar to enjoy the Moors and Christians festival. We hope they can stay for the parade on Sunday night (is that a mannequin standing next to our tourist councillor?).
The story goes that Turre was highly impressed by our choice of twinned town. They famously had a plenary meeting on the subject of finding something suitable for them. 'We don't want anything too foreign', they thought, driving a pencil line through most of Europe, 'or really anywhere that is different in their values from ourselves' (Catalonia fell from the list with a quiet thud). 'No one who might swamp us with different ideas, and anyway, we don't want to subsidise expensive bus tickets for our inhabitants...', they agreed. In the end, so goes the story, they chose to twin with Mojácar.
I like the Andorran flag which can be seen in the Plenary Room at the Mojácar town hall. There's the Spanish one, the Andalusian one and the Andorran one all in a row.
And if the Andorran ensign is the same as the Romanian flag, who are we to quibble?

Pedro Sánchez has done it – he has somehow climbed from the abyss of de-selection just eighteen months ago, to a party with just 20% approval only last week and now to the very top of Spanish politics, leaving – notably – Susana Díaz, Mariano Rajoy and Albert Rivera to lick their wounds as they consider their own ‘what ifs’ and mistakes in the Game of Thrones. On Saturday, Pedro Sánchez became the prime minister of Spain. 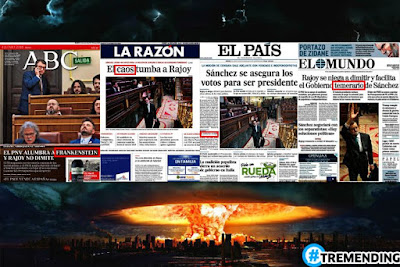 His enemies are everywhere – with the Partido Popular passing around a press-kit to editors and commentators, including the charge of a ‘Frankenstein Government’, due to the make-up of his support (180 deputies from the PSOE, Union Podemos, ERC, PDCat, PNV, Bildum and Nueva Canarias – all with their own agendas). The PSOE itself, indeed, has fifty less deputies than the PP, the leading opposition party.
The debate and vote went through smoothly enough last Thursday and Friday, and Mariano Rajoy – perhaps oddly – refused to resign his post, preferring to go down in flames instead (probably due in part to future cases of corruption on the books).  The Senado however, is unaffected and remains in PP hands. What could they do there to salvage their loss (even at the cost of Spain’s reputation and the Spanish people)? Perhaps start by voting down the very national budget that they, as a government, had approved just a week ago.
Pedro Sánchez was born in Madrid in 1972, speaks excellent English and French (here he is speaking against Brexit), he’s a committed atheist and he owns an apartment in Mojácar (heh!). His wife is Begoña Gómez (here).
And what of Rajoy? ‘The Former PM Mariano Rajoy and his team await a cushy future. Members of the defeated Popular Party government can return to their civil servant positions, and most also retain their MP status’, says El País in English here. But who will take over from Don Mariano following a slightly surprising resignation as party leader on Tuesday? The two leading choices – Soraya Sáenz de Santamaría and María Dolores de Cospedal, are at daggers drawn, says El Diario here. A third possibility is Alberto Núñez Feijóo (here).
As part of the fallout with Sánchez preparing to move to his new home at La Moncloa, the shredders there were hard at work apparently. We were also treated to the news that 1,300 (no doubt rather surprised) advisors of the outgoing government would also be out of a job.
But, even in Spain, life goes on... 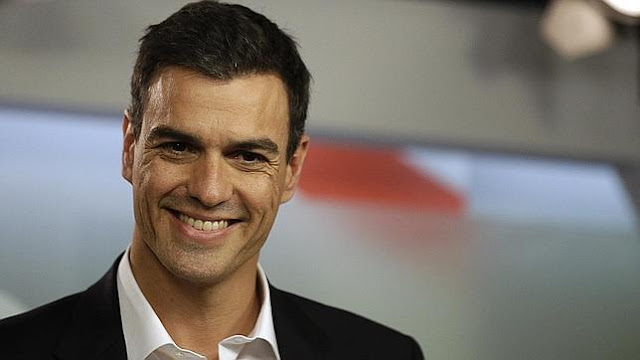 On Friday, Pedro Sánchez became the new president of Spain, after his no-confidence vote against Mariano Rajoy succeeded. Sánchez' support came from most of the opposition parties: Unión Podemos, the ERC and PDCat from Catalonia and the PNV and Bildu from the Basque Country. Ciudadanos loyally supported the PP (no doubt in the hope of a cock-up sooner or later). Now comes a new set of ministers and secretaries and so on.
Sánchez won with a national clamour against corruption, endemic in Spanish politics. We hope he can address this issue soonest.
Posted by Lenox at 11:40 No comments: