Such a hot summer. As we slide into September one story that has saddened the Spanish is the apparent death of the Mar Menor, the Murcian inland sea that is cuffed on the Mediterranean side by the La Manga resort. This ecological tragedy would appear to be due to the run-offs of fertilizer – nitrates and phosphates – into the saltwater lagoon, poisoning all the creatures that live there. 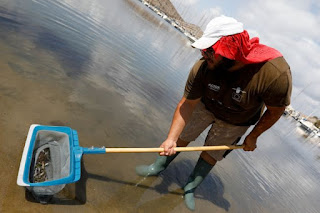 It’s been on the cards since 2016, when the waters suddenly turned brown and fish and plant-life began to die. Without light reaching the bottom, the algae expires. Without algae producing oxygen, the fish die.

There are endless ‘illegal’ farms surrounding the water and – as often happens – more effort is spent on blame than on resolution. The provincial authorities blame the national government rather than simply policing the area and closing down all the surrounding farms who allow ‘spillage’. In reality, the Statute of Autonomy puts the entire responsibility on the maintenance of the Mar Menor with the Murcian regional government.

There are 8,500 hectares of illegal farms on the 63kms of shoreline that circles the Mar Menor says the WWF. But, farmers are voters too…

There have, in point of fact, been over 200 denuncias in the past year for farmers fouling the lagoon, but none of them have been resolved.

And how about the effect of a stricken Mar Menor on the local tourism? Besides apartments, holiday homes and so on, there are 11,000 hotel beds in La Manga. The head of the regional tourist federation says that bookings are down to nothing and next year looks bad. He also says, "All this has been caused solely and exclusively by the lack of political action. The neighbourhood and business associations have been demanding a solution for the Mar Menor for years. But nobody has done anything".

As the agriculture has intensified – thanks in part to the extra water from the Tagus/Segura pipeline – so has the resort. Compare these two photographs taken ‘before and after’.

There never were just two parties in Spain, although until recently (leaving the regional parties aside for a moment), we had a two-party system. The PP and the PSOE – the right and the left.

The fringe parties, like the Izquierda Unida (a group made up of dozens of small radical parties and associations), the whatever centrist party de jour (the UCD, the CDS, the UPyD and latterly, Ciudadanos) and perhaps over the hills and behind the trees, the peculiar fascist parties (the venerable Falange Española de los Jons (here), plus the Alianza Nacional and numerous other oddities) all bubbled quietly in the background, along with the ludicrous Pacma (the pets’ party here) and the Basque, Catalonian, Galician, Canarian and others regionalist, sometimes independent groups.

Plus the remarkable birth of the Podemos (far left) in March 2014 and Vox (far right) a few months earlier in December 2013. Why would these two parties become so successful – perhaps because the two main parties were at the time embroiled in many dispiriting cases of corruption: Madrid and Valencia for the PP, and Seville for the PSOE.

Podemos rose fast, gaining an astonishing 69 deputies in their first national elections of December 2015 – over 20% of the national vote. In the 2019 elections, the party had shrunk to 35 deputies and almost 13% of the vote. On the bright side (for them) they joined the PSOE-led government coalition as a junior party.

Vox on the other hand started slowly, with no representation in the 2015 and 2016 elections, however the election in December 2019 brought them 52 deputies and 15% of the national vote.

What had happened to suddenly turn just another partido de la ultraderecha into such a giant?

While there’s no doubt that obscure money and powerful enemies have done much to scupper Podemos (Venezuela, anyone?) it now emerges that at the same time, similar (or maybe the same) groups have been financing and promoting Vox.  Wikileaks has just published a wealth of material on the far-right Catholic organisations in Spain Hazte Oír and its partner CitizenGO. The two groups, together with some right-wing newspapers (such as OKDiario, ABC and La Razón) and a number of wealthy supporters and companies (named here) have been pushing the party’s fortunes forward.

Meanwhile, a 2019 undercover investigation by OpenDemocracy confirmed ties between Spanish Hazte Oír and CitizenGo with right wing political parties across Europe in Spain, Italy and Hungary. There have also been reports regarding ties to El Yunque, a secret militant Mexican Group…’. The article gives examples of the financial support from CitizenGo to Vox.

The story broke in Spain last week: Público reported that ‘Major fortunes and senior Spanish executives financed the birth of Vox through the ultra-Catholic group Hazte Oír’. Certainly, we read here that some members of Hazte Oír wound up as deputies in Vox.

The names of people and corporations who have donated funds to Hazte Oír, at least up to 2017, includes Esther Koplowitz (FCC), Isidoro Álvarez (El Corte Inglés) and Juan Miguel Villar-Mir (OHL).

Bringing rise to stories like ‘Thousands of people call for a boycott of El Corte Inglés for having financed Vox’.

All of which may explain how Vox – just another obscure far-right party knocking around the gutters in 2013 – suddenly shot to public prominence.

Needless to say, these damaging revelations from Wikileaks have naturally not found room in any of Spain’s more conservative news-sites.