Fitur and the Taxi-drivers


The FITUR is currently running in Madrid (through Sunday). This is the second largest travel fair in the world, after the ITB German one, and brings 250,000 people to visit and do some business with over 10,000 exhibitors – countries, regions, resorts, companies and experts. It’s been going since 1980 and is housed on the edge of the city in the Ifema buildings. 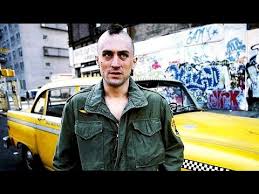 Which brings a problem this year – the Madrid taxi-drivers are on strike and they have decided to blockade the site, to make it all a bit more irritating (see here) and thus the King had to enter Wednesday by a side-door to open the fair (here). In short: chaos at Fitur (tourism being the main money-spinner for Spain: thanks, taxi-drivers!). The taxi-drivers want more of their pie, and are noisily campaigning against the VTC cars from Uber and Cabify – indeed those two companies have threatened to withdraw from Barcelona on the back of a savage taxi-strike there – with the added loss of 3,500 jobs.
Spain is very partial to tourism, with 81,200,000 foreign visitors in 2018, leaving behind a satisfying amount of money (estimated as an ‘associated spend of 89,400 million euros’) as they returned to their own countries. The country also employs, in some way related to tourism, some 2.8 million people.
Spain also saw a huge number of national tourists who took a few days or weeks off work to visit their old pueblo, or stay in a hotel or with friends. The numbers seem too hard to work out, but are thought to be impressive.
Tourism may have hit its upper limit, with 2018 figures actually slightly down on 2017 by 0.8%. Still more than enough says those of us who don’t run a souvenir business or a hotel or who live in a barrio overflowing with Airbnb operations.
The Brexit may serve to slow things down in 2019. We read that ‘...The numbers speak for themselves. In 2018 Spain attracted 17.6 million British visitors. That’s 22% of the 80 million foreign tourists that visited the country, according to Exceltur. While the number was down by over a million on 2017’s record haul of 18.8 million British visitors, it still dwarfed the number of visitors from second-placed Germany (11.8 million) and third-placed France (10.8 million)...’.
Another Brexit headache is the potential problem with Iberia and Vueling which are either British or Spanish – depending on circumstance. Being British would knock them both out of the European skies. ‘...If the current legislation is not changed or a new loophole inserted into it, Iberia and Vueling’s European fleet could find themselves grounded in 70 days’ time. As absurd as it may sound, even planes shuttling between Spain’s two biggest cities, Madrid and Barcelona, could be refused permission to take off...’.
Spain knows full well that there are other places for a holiday. Without disease, terrorism or major incidents (things which could also occur here),’... Last year’s slowdown was also accentuated by the “marked recovery” of cheaper rival destinations in the Eastern Mediterranean such as Turkey, Egypt and Tunisia. According to Exceltur, these three countries alone attracted 12.5 million more tourists last year...’. Now we have perhaps reached our upper limit, we need to work hard to stay where we are (thanks, taxi-drivers!).
Longer quotes in this article come from Wolf Street here.
Posted by Lenox at 13:31 No comments:

There Are Just Two Choices Now.

The, well let’s call it the compromise of Theresa May and her soft-Brexit has gone down the tubes, leaving two powerful sides that both agree on only one thing – not to hand over 39 billion pounds to Brussels. One by bringing a hard Brexit and the other by adhering to the European Union. While we would like to point out the bleedin’ obvious (sic), let us here just consider how these two courses would separately affect those Britons living in Spain – the 300,000 or so legally and the many more besides (who knows, who cares?). 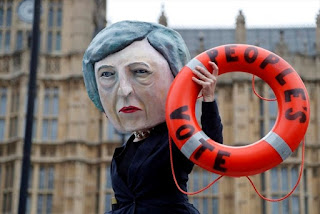 The Britons living in the rest of the EU-27 and the Europeans living in the UK, maybe five million or so between them, will no doubt harbour a similar opinion to the majority – but inexplicably not all – of those Brits who live here (or they certainly should).
No deal or a full U-turn, the latter option no doubt prefaced by a ‘Peoples Vote’ (in which we expatriates will in many cases not be invited, once again, to participate).
Our privileges here as fellow-Europeans were under threat from a Soft Brexit, but there was evidence of conciliation between the foreign ministries. We would have lost free movement and probably our voting rights (such as they are). Some jobs would have gone here and there. We might have had to get Spanish driving licences and perhaps other useful paperwork we should already have obtained anyway. In certain cases, possibly, some of us might have been deported as ‘not wanted on voyage’.
But now, the game is truly afoot. A hard Brexit: a slap in the face to Europe, or a ‘Peoples Vote’ (with, one must expect, the happy conclusion of a win for the Remainers). For the British living in Spain, that’s a frightening choice which others will be making for us, ignorant and uninterested as they most certainly are in our fate.
Posted by Lenox at 12:22 1 comment:

Lots of Tourists, Please, and a Couple of Foreign Settlers Should Do It

While the Spanish authorities like to promote this fine country as a tourist destination (Fitur, the international tourist fair, is held later this month on 23rd – 27th January), there has never been much interest in promoting housing for foreigners ‘el turismo residencial as it is oddly called). You are welcome to come for a week’s holidays, but the Spaniards aren’t particularly concerned with those who might be buying a house here (and spending, annually, at least 100 times more than a tourist does). They may suppose that foreign residents don’t buy souvenirs and don’t sleep in ‘all-inclusive’ hotels.
And if the foreign buyers still bring in too much money, well, we can always knock down their house (Len and Helen Prior: 11 years ago, Wednesday), or cut their water and electric. The AUAN, a foreign-run organisation, appears to be the only hope for those victims.
The press is pretty much silent on the lost opportunity as well, perhaps as los guiris don’t buy many newspapers (or, as we have seen, vote), or maybe because the media simply doesn’t understand the economics involved.
Indeed, only two peripheral stories tend to work their way into print. 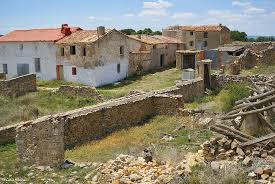 The first is the ‘lamentación’ of the dying pueblos (video) of the interior – small villages with their young-folk moving away to the attractions of the big city. Moribund pueblos that have only a few hundred old folk left, with no bank, no doctor, no pharmacy and probably just a few to serve them in the local municipality. How can we reverse this trend, they editorialise. With more births (hah!), cheap rentals, or maybe some refugees to build things up? But, be careful not to occupy one improperly, as happened in Fraguas, Guadalajara, where the small group of hippies ended up with a sentence of 18 months for their troubles.
The other subject that’s always good for a few column inches is the story of the deserted hamlet for sale. Why, there’s even an agency that specialises in the business. We hear that Gwyneth Paltrow seems to have inspired more than a few journalists with her Christmas wish aldea abandonada in Galicia (indeed, apparently a Dutch couple are buying it).
There are, we read, any number of these hamlets on the market, including one in Almería, but who exactly wants to buy one? A wealthy person might buy a crumbling palacio, or a large house, and repair it, but a village? What on earth for? Rural tourism maybe?
Regardless of this, El País in English ran an article earlier this month titled ‘Thinking of buying a deserted village in Spain? Hurry, prices are going up. Spaniards are now entering a market that has been traditionally dominated by Belgian, British and French buyers’.
Posted by Lenox at 07:06 No comments:

LaSexta has some useful news programs on it, including Salvados with Jordi Évole, and El Intermedio with the oddly named El Gran Wyoming – if you like a little comedy in your reportage, but this commercial TV channel is also plagued with ‘casino’ adverts (and, over the Christmas holidays, endless scent, perfume, cologne or rather ‘fragrance’ adverts. How much of this stuff can you splash on your body?). The casino gambling appears to be configured by computers, with an unexplained bias towards the companies involved. They even give the punter some tokens, free, to encourage them. No doubt Tele5 has similar adverts, but then, who watches Tele5?
And we thought that a flutter on the quiniela, the primitiva, the EuroMillions, the ONCE, the Cruz Roja and the Lotería Nacional would be enough to keep us all in pocket-change. All these and more legal gambles, including an evening down at the bingo, and yet the police will cheerfully raid a bar with a game of housey-housey going on. In fact, the police are even more interested in bars showing football on their TVs without a proper licence, and some 2,000 of them have recently been raided and threatened with fines and prison terms. Perhaps we had been betting on the result. 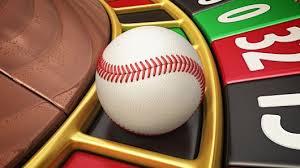 In one area in Madrid – a poor one, it goes without saying – out of every ten shops and stores, one is a betting shop.
Two out of every ten Spaniards play with sporting bets, to a lesser or greater degree, according to El Español, and without this type of business, the media (including our friends at LaSexta) would lose over 130 million euros a year in advertising.
A report here says that ‘...Spanish-licensed online operators generated revenue of €173.3m in the three months ending December 31, 2017...’. With so much opportunity available for the gaming companies (and dare we say it, money launderers), it’s no surprise that Gibraltar is a major player while both Ceuta and Melilla are eying the advantages of setting up in modest competition. Another report, here, says that the football club Real Sociedad is the only club in La Liga that doesn’t take sponsorship from gambling companies.
Gambling is indeed becoming a problem now, with various advice organisations set up to stop ludopatía (‘...It is a mental illness catalogued as an addictive disorder, in which the person who suffers from it feels enormous needs to play...’), says Nueva Tribuna here.
Between ‘casino’, lotteries, ‘sport betting’ and a quick game of dominoes, it’s a wonder we know how much will be in our wallets come morning.
Posted by Lenox at 19:26 4 comments: