It is now a month since ‘We saved Christmas’ with the consequent rise in contagion levels to today’s gloomy (and frightening) figures across Spain of around 900 cases per 100,000.  Saving Christmas meant allowing us to go shopping, to gather together as a family over the special days of Christmas and New Year and to stop off for a merrie flagon of mulled wine or two at the corner bar, with a few rowdy friends. 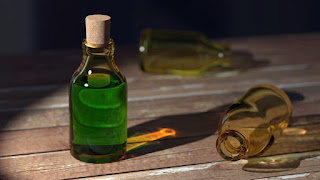 The bar- and restaurant-owners have had it bad these past ten months. Social distancing, their interior spaces sometimes closed entirely, or with only meals to go, high-rents and low-income, and their margins have been holed under the waterline. Many have closed for good.

We – the poor suffering consumers – are assailed by unhappy bar-owners on the TV news most days – as if it were somehow our fault that we no longer support their establishments.

Honestly, I shout at the TV screen, it’s not you – we just don’t want to get sick.

So, no, I’m not going to have a drink in the local pub.

As Fernando Simón (the Government’s expert on pandemics) says ‘nobody goes to a bar to sit in the corner by themselves’.

This point of view is in line with the Government’s focus on the hospitality sector, which is evidently partially responsible for the third wave of the Covid-19 pandemic.

There are those who say this is all a plot of some sort, and a demonstration was held this past Saturday in a rainy Madrid in support of this theory. ‘Several hundred people without masks demonstrate against the vaccine’, says MSN here.

Two years ago, La Sexta reported that there was a higher density of bars and restaurants per capita in Spain – at 175 inhabitants per establishment – than any other country in the world. This figure will now have been sharply readjusted downwards.

In the hope that, when this is all over, our old habit of a friendly beer in the neighbourhood saloon will return. 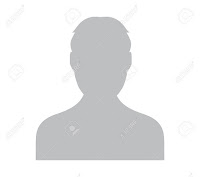 There's a chap called Ron Howells who posts items from The Euro Weekly News on various Facebook pages. While Ron lives, according to his profile, in Málaga, he often posts on sites based in other parts of Spain - either (if one is kind) in an effort to inform readers, or otherwise (if one is not) to promote the slightly absurd English-language expat free newspaper and its worried clutch of advertisers.

While these sites are welcome to carry his promotions for the EWN, they may not be aware of the scope of Ron's endeavours. He is currently 'liking' 498 sites according to his profile. While we don't know how many Facebook pages based in expat Spain he is a member of, we can be certain that  they are all regularly assaulted with EWN posts from Ron, often with subject-matter which has nothing to do with this country. Indeed, looking at his page, it seems clear that he rarely posts anything else.

This might suggest that he is in the pay of the EWN and that his job is to promote their business, and - who knows - even anonymously write their copy.

I wonder, are there others like him out there in cyberspace?

Later: well, I've found one - he's called Ian Platt and he posts articles from the highly peculiar Global247News in a number of expat Facebook pages. Unlike Ron, above, Ian lives in Benidorm, and drops 'items' in (at least) several sites based in Andalucía. 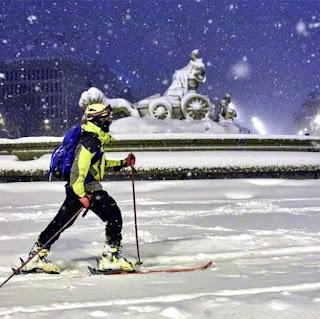 Madrid woke up last week to heavy snow as Spain suffered its coldest weather for fifty years. Indeed, a record was made and broken just 24 hours later by another, even colder measurement (in the Picos de Europa, León: minus 35.6ºC). On Monday, the weather people were saying that, in general, things were due to get even worse across Spain until perhaps Thursday 14th January. It is, of course, all the politicians fault.

The joke going around says ‘After just one year of commie-rule in Spain, Madrid is looking a lot like Moscow’. In fact, with 60cms of snow last Saturday, it looked worse than the Russian capital – no trains, buses or, barely, cars. One fellow was photographed (videos) skiing down the Avenida de la Castellana.  Reddit/Spain has lots of pictures featuring snow.

Many foreigners are surprised by these extremes, fondly imagining Spain to be warm all year round. In fact, since almost all of the country is elevated (the average height above sea level is 660m says Wiki), away from the costas, we tend to enjoy bubbling heat in the high summer and perishing cold in mid-winter.

As for Global Warming (what, with these freezing days?), it’s ‘perfectly reconcilable’ with  Climate Change says the ABC here – and anyway, just to make the point, it’s hot in Australia right now..

To make bad things even worse, the price of electric rose sharply (except in Barcelona, where the service is a publicly-owned company). Schools have to keep their windows open (Covid rules) and the army was called in to help volunteers clear the streets. Indeed, even Pablo Casado managed a brief photo-shoot in Madrid as he shovelled some snow.

From Bloomberg (partial paywall) here: ‘Gibraltar Dodges Hard Brexit After Spain and UK Reach Accord. Spain and the UK struck a last-minute deal over Gibraltar that eases access to the territory and removes the threat of fresh restrictions at the border with the European Union following Britain’s departure from the bloc on January 1st.

A preliminary agreement was reached that would help build “shared prosperity,” Spanish Foreign Minister Arancha Gonzalez Laya told reporters on Thursday. The territory will operate under passport-free Schengen terms, she said, adding that the final agreement is expected to come into force within six months…’. 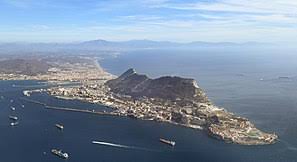 From the HM Govenment comes a statement from the British Foreign Secretary.

Meanwhile, the increasingly rightist El Mundo, helpfully compares it to the fall of the Berlin Wall (!).

It does seem a bit odd, as the United Kingdom leaves the EU, that a small corner of it goes in the other direction. Spain will henceforth be responsible for who can visit Gibraltar.