Pablo Casado says he will support Pedro Sánchez against the current importunities and aggressions of Morocco – as long as Sánchez tosses his partners the Unidas Podemos from the Government.

The PP certainly has some interesting proposals while the remarkable sense of timing of Pablo Casado is once more in evidence. As we learned, the conservative leader met six days before the migration crisis with leaders of two Moroccan parties – the Istiqlalthat and the RNI – that, inter alia, are claiming Ceuta and Melilla (cities with a combined Spanish population of 170,000 souls). And he did so after leaking the decision of the Spanish Executive to provide humanitarian aid to the leader of the Polisario Front, Brahim Ghali (smuggled into a hospital in Logroño by the Spanish Secret Service). 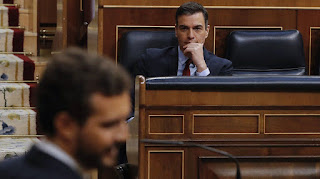 In the Cortes, an attack against Sánchez in the regular session of control was answered by Sánchez saying he wasn’t sure which country Casado was representing in his aspirations, and he quite understandably questioned the PP’s leader’s loyalty to Spain.

We remember last year’s efforts by Pablo Casado to stop the aid from Brussels that Spain needs following the Coronavirus crisis.

His loyalty to the notion of democracy, that noble concept, appears to be in some doubt (after all, who was it who won the elections in December 2019?) as he blurs the concept of opposition. His efforts appear to be to destroy rather than build, with an ambition for himself rather than for the country he hopes one day to represent.

The Spanish joke that his nickname is fraCasado, or ‘busted’.

From El Periodico here: ‘In Pablo Casado's opposition to the Pedro Sánchez government, one line has almost always been imposed: criticize everything, oppose everything. The rare cease-fires are brief, like when the president of the PP allowed himself to be seduced by the temptation of the centre. But lately, perhaps following the results from the Madrid elections, Casado’s opposition for-its-own-good has reached the top of his game…’.

Imagine how strong Spain would be if they all pulled together.

I generally run a piece of music of some sort (related to Spain) at the end of my weekly Business over Tapas news bulletin about Spain. Like many older readers, I spent a lot of time in record shops during my younger days – in London, Madrid and San Francisco, and have a large collection of much-loved (but no longer listened to) records put away on the shelves in the guest bedroom.

For a few years, as part of my activities running The Entertainer, the precursor to the EWN (note their edition numbers), I was given a couple of hours every Sunday to fool around in Mojácar’s Radio Indalo and – as Larry Spyne – could play some of my music wrapped around silly remarks (and beer. Lots of beer). 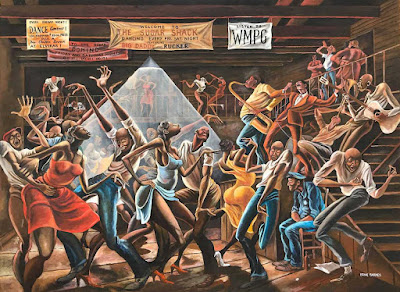 The broadcaster eventually closed down and later Spectrum Radio became Mojácar’s only radio station, despite the town hall having the licence for a municipal one gathering dust in the mayor’s chest of unrealised plans and broken dreams.

This week’s piece is a comic song that says, Let’s go to the bar. The car is broken, there’s nothing on TV, the lockdown has eased, the girlfriend is in Sória, the grown-ups are arguing and the pizza tastes like crap.

Alright, it’s not Carlos Santana, but it’s amusing and after all…

The good news is, the bars are open again… See?