The Effect of the Coronavirus on Tourism 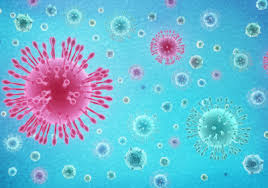 From The New York Times here: ‘The Coronavirus crisis that has engulfed China could sicken one leading cruise line and the air travel industry, companies say. Cruise operator Carnival Corporation indicated the outbreak may cause its earnings to take on water this year, while Boeing officials predicted it would stall the air cargo industry and cut into airline revenues...’.
There is little doubt that, barring an unlikely rapid solution, the Coronavirus will bite deeply into the world economy this spring and, nearer to home, the Spanish tourist industry. Who will want to share a cruise with a large number of passengers, any one of which might cause a serious outbreak and quarantine? Better to cancel and plan for next year. Who, too, will risk an uncomfortable and cramped aeroplane flight, fearful of every cough from a fellow-passenger and a nervous wait in some well-travelled airport?
Figures out so far this week as the tourist industry begins to take stock: ‘The Coronavirus effect: airlines will lose US $ 29.3 billion this year’.
‘It’s not only Chinese tourists, business travellers, and property buyers who’re not showing up, but also travellers from all over the world who’ve gotten second thoughts about sitting on a plane...’, says Wolf Street here.
This is moving quickly. A hotel in Adeje, Tenerife, with 1,000 tourists was put into quarantine on Tuesday.
As we panic, and storm the supermarkets, visions of an apocalyptic end in our minds, a major study concludes that the Coronavirus has a low lethality, perhaps as low as three in a thousand. Around 95% of patients will recover without any complications.


The main casualty will be the tourist industry – which accounted for around 15% of Spain’s GDP in 2018.
Perhaps, as a beneficial side-effect, we can anticipate the Spanish authorities looking a little more kindly on those foreign residents who live here full time, modestly contributing to the economy.
Posted by Lenox at 02:42 No comments:

The Straits of Tanger

Much is written of Spain’s ambition to return Gibraltar to the motherland and of the Gibraltarians’ resistance to this project. We know that it wouldn’t be in any way easy, as in the unlikely event of a, let us say, hostile take-over, the 32,000 Gibraltarians would either need to become somewhat unconvinced Spaniards, or be repatriated to the UK... or be sent to populate the Isla de Perejíl. Joking aside, the situation remains tense in the Spanish conservative world, if less so elsewhere. The right-wing La Razón for example speaks of ‘The Spanish hostages of Gibraltar’, meaning the 14,000 Spaniards who cross the frontier each day to work there. We read that ‘Since Felipe González opened la Verja (the gate) just thirteen days after arriving in La Moncloa in December 1982, Gibraltar has miraculously gone from being an unsustainable enclave for the British and without an economy worthy of that name to become a flourishing financial and online gaming centre with the third highest GDP per capita on the planet after Luxembourg and Qatar. Meanwhile, the neighbouring municipalities of the Campo de Gibraltar constitute, with 30,000 unemployed, one of the most jobless areas in the entire European Union. How is this possible?...’.  There are other, more moderate voices, which aim to ease tensions, since Gibraltar provides wealth for the surrounding Spanish municipalities. If the smuggling and the offshore tax issues could be resolved... Reuters tells us that ‘Gibraltar is encouraged by Spanish 'pragmatism' on post-Brexit ties’, saying ‘....“Sánchez has called for a different approach, one which puts a historic sovereignty question to one side and focuses on the opportunity we now have to create an area of shared prosperity on both sides of the border”...’.
But as Spain considers Gibraltar, perhaps with some help from Brussels together with the UK’s change of fortune following Brexit, There is another player to watch. Morocco.
It has long been said that Morocco would find much support internationally, if Gibraltar were to fall into Spanish hands, to claim for itself both Ceuta and Melilla (with a combined population of 160,000 souls).  Now it appears that Morocco is beginning to make its move.

Morocco has built a huge container port east from Tangiers at Ksar es-Sghir called Tanger-Med which, by last year, ‘...was upgraded to handle over 9 million containers and now ranks 18th in the world...’ (wiki). An article from Reuters last July says ‘Morocco's Tangier port to become Mediterranean's largest’.
A headline from El Español this weekend: ‘Morocco strangles the frontiers of Ceuta and Melilla’, by banning passage of all merchandise into the two enclaves. The news-source, another conservative like La Razón above, says ‘The Kingdom of Morocco has never recognized Spanish sovereignty over Ceuta and Melilla, which it considers two "occupied cities."...’. The Morocco World News also treats the story here: ‘The presidents of Ceuta and Melilla have called Morocco’s decision to tighten restrictions on the borders of the two Spanish enclaves an attempt to “isolate and suffocate” their economies...’. Inevitably, Ceuta and Melilla are fighting back: ‘Ceuta and Melilla go on the offensive to respond forcefully to the pressure of Morocco’ here. The plan appears to be to attract new kinds of business (possibly at Gibraltar’s expense!).

The tug of war at the border crossings of both enclaves that has been seen on other occasions appears to have become more notable as Morocco has also recently claimed authority over all its Atlantic coastal waters as far as the Canary Isles, and suddenly, if that weren’t enough to worry about, Algeria has done the same thing in the Med, claiming as its waters the sea as far as the Balearic Island of Cabrera.
Posted by Lenox at 07:35 No comments:

To be Poor in Spain

A happy life includes a companion to share it with, good health, shelter, food on the table... and a table. A surprising number of people in Spain have been found to be without the last three of these absolutes. 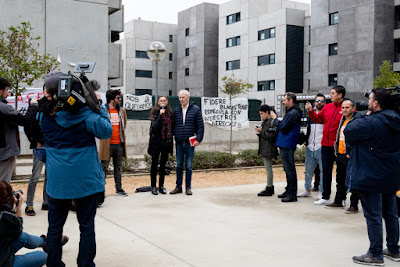 We begin with a depressing title from El País in English: ‘Spain’s social protection system is broken, says United Nations expert on Poverty and Human Rights’. It adds, ‘After a 12-day visit, Special Rapporteur Philip Alston concludes that ‘people in poverty have been largely failed by policymakers’’. The savage report continues ‘...This expert described “deep, widespread poverty and high unemployment, a housing crisis of stunning proportions, a completely inadequate social-protection system that leaves large numbers of people in poverty by design, a segregated and increasingly anachronistic education system, a fiscal system that provides far more benefits to the wealthy than the poor, and an entrenched bureaucratic mentality in many parts of the government that values formalistic procedures over the well-being of people.”...’.
The story has been picked up by The Guardian here ‘Spain abandoning the poor despite economic recovery, says UN envoy’, while ElDiario.es has an interview with Alston and leads with ‘“The authorities turn a blind eye to the conditions of immigrant day labourers”’.
He did a full job, too. Alston visited the hovels where the immigrant farm-labourers live – ‘...”I have visited places that I suspect many Spaniards would not recognize as part of their country. Poor neighbourhoods with much worse conditions than a refugee camp”...’.
On another subject, Alston had criticism for rental costs. “The Government does not take control of the rental price seriously”, he is reported as saying in an interview with Público here, adding that he considers housing to be Spain’s leading problem.  Evictions are a major source of social friction, with the Australian Sight Magazine reporting on one in Barcelona: ‘...Thousands of families are evicted each month across Spain, as a combination of over-tourism, rising immigration and a growing urban population push up housing prices, leaving many tenants unable to afford rent, say housing rights advocates. As local activists call on the government for solutions, advocacy groups like Stop Desahucios ("Stop Evictions") are finding ways to help people keep their homes, with some comparing the situation to a refugee crisis. "The housing crisis situation in Spain is comparable to less developed countries where they have seen big displacements," said Santi Mas de Xaxas, spokesman for the Mortgage Victims' Platform (PAH), which runs Stop Desahucios...’.
The high cost of housing, says The Economist here, is an understandable stimulus to vote for populism. ‘...Housing is also a big reason why many people across the rich world feel that the economy does not work for them. Whereas baby-boomers tend to own big, expensive houses, youngsters must increasingly rent somewhere cramped with their friends, fomenting millennials’ resentment of their elders...’.
So, we must travel to La Cañada Real, the largest hobo camp in Spain. Wiki describes it as ‘...a shanty town in the Madrid Region, a linear succession of informal housing following a 14.4-kilometre-long stretch of the drovers' road connecting La Rioja and Ciudad Real...’. It says ‘...The population is mixed, it houses both Spaniards (mainly Roma) and immigrants (mainly from Morocco). As of 2017, it had a population of 7,283...’. El País calls it ‘The forgotten fourteen kilometres of Madrid’.
Not all refugees make it to the sunny uplands of La Cañada Real: The Guardian (Nov 2019) reports ‘...authorities are unable to provide basic shelter and protection to dozens of migrants and asylum seekers, including children. The number of people arriving in the Madrid region to seek asylum has almost doubled over the past year, rising from 20,700 to 41,000...’.
The poorest region of Spain is Extremadura. A report from there says ‘In Spain, 26.1% of the population is at risk of poverty or social exclusion, this percentage rises to 44% in the case of Extremadura.  Although La Crisis of 2008 savaged the incomes of many families, the poverty rate was already worrying even before the recession...’.
We all know the rich from endless articles in the media. But who are the poor?
Posted by Lenox at 04:13 No comments: