There are a lot of pluses in being a foreigner. One of them is that you can be eccentric without anyone minding too much (‘ah well, foreigners, hey?’) and another is that you can learn a whole new culture: its language, history and customs.

If you want to.

Or alternatively, when the moment comes, you can pretend absolutely no knowledge of the language whatsoever. No comprendo and a crazed grin often works wonders.

A school-friend of mine, like me, is married to a Spaniard. Like me, his Spanish is perfect, but, again like me, with a marked English accent. At least we have better grammar than many Spaniards, knowing the difference between a ver and haber, or vaya and valla.

We are in celebration as my friend has just got his Spanish nationality – it took him over five years for the appropriate funcionarios to leave their mark, but there it is. Passport too! Me, all I’ve got is the new-fangled foreign identity card or TIE (a loathsome thing which celebrates my novel status of no-longer-even-being-considered-a-European).

He called me this weekend to tell me the good news about his new nationality, and so – perhaps in a burst of (his newly-acquired) Latin excitement - he spoke to me over the phone in Spanish.

He never used to.

The British living in Spain have a regular – and painful – squabble about whether they are ‘expats’ or ‘immigrants’ – most of them leaning for some reason towards the latter. Now, my school-friend – he’s an immigrant! 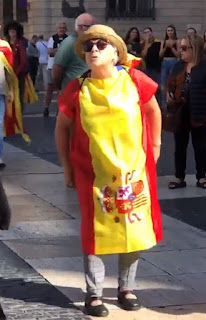 But do the Spaniards think of him as Spanish? Probably, at first look, not; unless he wears a rojigualda tee-shirt – or writes a book about Lorca (ejem: Ian Gibson, Spaniard. Wiki).

Sometimes, foreigners become belovèd Spaniards at the drop of a hat – usually those who are very good at sports (there’s a hundred of them who became speedily naturalised in the past quarter century listed here). Indeed, several Europeans got themselves a quick Spanish passport through this scheme.

Others have it more difficult. Lebanese pop-violinist Ara Malikian (Wiki) may have obtained Spanish nationality, but he’s still barred from the Latino Grammies even after being nominated. He says "In Lebanon they do not consider me to be Lebanese enough because I’m of Armenian origin, the Armenians did not consider me to be Armenian enough because I was born in Lebanon. When I settled in Europe they did not consider me European because I was not born in Europe. It took me years to be in peace with who I am and to accept being the eternal foreigner". Here’s a YouTube theme of his.

Returning to sport: something which is most encouraging can be found at this year’s Olympics. There’s a twenty-nine strong independent team of refugees coming from eleven different countries. They are the IOC Refugee Olympic team here.