The Little Hotel in the Middle of Nowhere

The Junta de Andalucía has changed its tune about property in the region, allowing new licences for various projects which would not have been allowed under the previous regime. If only the Hotel Algarrobico had have been built today (ahem!).

One new hotel – a small one with just thirty rooms and a swimming pool – has been given the green light to be constructed in what was an old esparto-works in the Cabo de Gata (Almería): just a short walk from the Playa de Los Genoveses, described here (in a strange but understandable English) as ‘…the most beautiful bay of the Nature Reserve is this beach consists of dunes virgin fine golden sand’.

Diario de Almería has the sad story here. Oddly, the thirty rooms will need a licence for parking for seventy cars, which seems a lot – two to a room? Perhaps it’ll be a hotel for assignations. More likely though, even if they forgot to mention it in the article, there’ll be a swanky restaurant. Valeted parking, anyone? 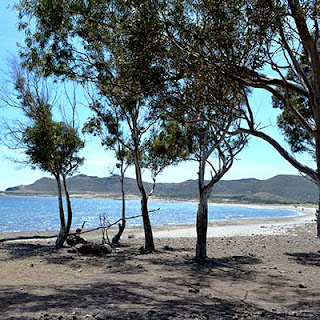 (Say, if they let Fulano build a hotel in a National Park, why not me as well, or how about just a teeny tiny urbanisation…?).

Mind you, the new hotel does sound nice – at least, according to the ABC which says here (paywall) that guests will be able to take the goats for a walk, thresh the hay and other bucolic delights. You might want to take your dinner jacket off…

The final word (apparently, Gosh don’t things change?) must come from the town hall, which in this case is Níjar.