A House for Pablo Iglesias 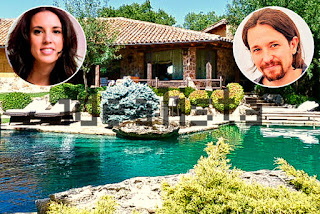 As more former members of the Partido Popular’s hierarchy are falling from grace (Zaplana, Juan Cotino and Fernández de Moya so far this week, and Pablo Casado under investigation for his fake master’s), the biggest story in the right-wing news remains the house that the Podemos leader Pablo Iglesias has bought with his wife (Podemos speaker Irene Montero) and their unborn twins. The house is rather grand (pictures here), with a pool and a garden and is located on the edge of Madrid in an expensive neighbourhood. It’s not so much the price – 600,000€ – that’s galling or even that they have taken out a huge mortgage to pay for it, but the duplicity of a leader of the masses buying a palace rather than living in a garret in a poor part of Madrid.
Unlike the Arts or football, politics (should) be about Image and for a Trot, that means living under a toadstool.
El Mundo has headlined the story every day since it broke with OKDiario on Friday (sold by an agency to the Media), with Tuesdays’ revelation as damaging as ever (well not really) that Podemos use the same bank as underwrote the hipoteca.
It was an incalculably bad move for Iglesias, who has now gone to the recourse of appealing to his militants, who have until the weekend to either ratify or reject his home-buying spree, in which case both Iglesias and Montero will resign from Podemos. (El Mundo assures us supporters consider the purchase ‘an act of irresponsibility). The item has even made the foreign press, with The Guardian noting here that ‘Pablo Iglesias and Irene Montero are accused of betraying principles over €600,000 purchase’ and Bloomberg saying that ‘Headlines in Spain have been mainly focused on whether the purchase is inconsistent with Iglesias’s previous comments condemning the wealthy’.
Other political leaders of course own homes, we would hope that they paid for them appropriately, but the cost of these dwellings has never raised much interest. The COPE lists a few here, but frankly, none of them begin to compare in grandeur with the homes of Julio Iglesias (here) or Ronaldo (video here).
The leader of the Izquierda Unida Alberto Garzón has just bought something suitably modest at 200,000€, we read (again) at El Mundo, which certainly feels it has A Story.
Nevertheless, this has done major damage to Pablo Iglesias, and maybe he should even step down for this calamitous misstep. But who could take over?
The left-wing titles are sympathetic ‘The "harassment of the extreme right" reduces internal criticism in Podemos of the purchase of the villa by Iglesias and Montero’ says El Diario While a fake news story announces that all are invited to the house for a barbeque on June 2nd – so far, 60,000 people say they are coming.
20 Minutos has a questionnaire as to whether Iglesias and Montero should resign. As one can see, the results are not good. Iglesias has done nothing wrong, but he has shot himself in the foot with this ill-conceived purchase.
Posted by Lenox at 12:05