The End of the Affair

The Diario de Almería has printed an article saying that the new phase of the grotesque Mojácar sea-wall (the 'paseo maritimo' with its pavement, its bicycle path, its gardens and wall) has now got the approval of the authorities. The paseo maritimo will therefore be extended from its current terminus at the Red Cross along the sea as far as the Maui beach-bar.
Since the road is narrow near the Maui, an area where the Patio, Aku Aku, El Cid and a couple of others are located, the new six-metre wide construction, elevated for protection from the Sea-Gods, will needfully go through the area currently occupied by the chiringuitos, leaving them with half or less of their current space.
They will not survive.
The cost of this abomination is three million euros. The town hall claims it doesn't have enough in its budget to finish the new ayuntamiento under the mirador in the village (the real reason being, of course, the so-far unnoticed and highly intrusive head to the lift shaft), but it can merrily shell out for the sea-wall which is proposed not for residents, but for the tourists. The mayoress says "it is well proven, a sea-wall is a necessity for any coastal tourist municipality. Due to the experience gathered from our already built stretches, it establishes adequate accessibility to the sea shore, providing the beaches with showers, drainage, sanitation, public lighting, street furniture, gardening and playground services. In short, it creates an essential framework for tourism".
The Maui and all have very little sand as it is. Now they will not even be able to see the sand with the sea-wall interrupting the view. where will the beach beds go (don't the tourists use beach beds?). 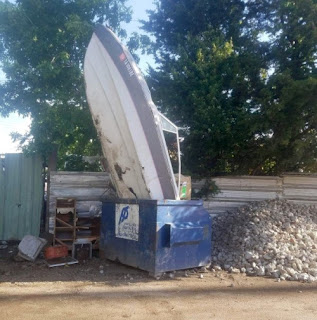 While Costacabana, the resort outside Almería which has no beach-bars (nothing is perfect) has recently built eight piers to attract both sand, bathers and fishermen, in Mojácar we don't want these things for some reason.
And all this for a cycle path which no one uses.
And what of the next stage (it will take the terrace of the Trufi, according to the owners)? Will it perforate the Pirata, the Cava and the Dolce Vita? Should they be demolished? What
do the tourists want?
The point of removing as many foreign-owned or foreign-run businesses is obvious.
Work for the paseo maritimo is to begin this year, says the newspaper.
Posted by Lenox at 01:24