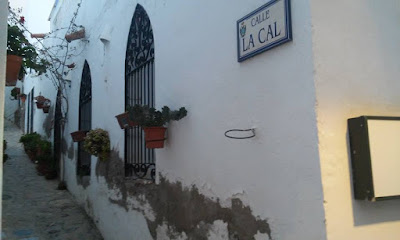 This is the Calle La Cal - a narrow street in Mojácar Pueblo. It's an odd name for a street where the whitewash is falling off, especially as Rosmari has been asking everyone to paint their houses for the tourist season. The street used to be called Calle Pedro Barato - in honour of Cheap Pete, an American who built the next door restaurant El Palacio back in 1970. He was called Cheap Pete because he was an antique dealer, always with the best price. Anyhow, La Calle de Pedro Barato - the ONLY recognition ever made by Mojácar towards all of those foreigners who revived this pueblo when it was nothing - was renamed by the current régime as the romantic-sounding Calle La Cal. Whitewash Street.