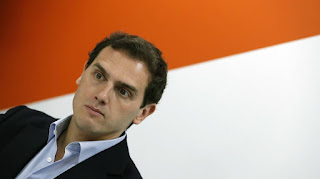 Four years ago, Albert Rivera was Europe’s Golden Boy: the man who spoke for the uneasy elite and the moral yet indignant middle-classes. Now, the same man is enjoying a perfect storm. His refusal to either support or at least abstain and allow Pedro Sánchez to form a government is causing him headaches. His party’s apparent romance with Vox is causing him nightmares. So far, he has been criticised by his erstwhile mentor Emmanuel Macron who now openly wonders whether Ciudadanos is a Brussels ALDE ‘liberal party ally’ after all.  Several of his senior partners in Ciudadanos have quit in the past few days, including his party spokesperson for finance Toni Roldán (here), the MEP Javier Nart (here) plus the Asturias regional candidate Juan Vásquez (here) and his substitute Ana Fonseca (here). Support from star-signing Manuel Valls has also disappeared. Worse still, the party co-founder Francesc de Carreras criticises Rivera heavily in an interview with La Vanguardia ‘He refers to the leader of the orange party as "a capricious teenager who takes a strategic 180-degree turn and puts supposed party interests before the general interests of Spain"’.
Now, as Rivera refuses to pose in a photo with Pablo Casado and ‘his executive shows signs of fracture’ (here), seventy per cent of his supporters think the party should allow Pedro Sánchez to be sworn in as president and as El Mundo reveals this week, a dispirited 20% of Ciudadanos voters are now regretting their choice.
Unlike Podemos, Ciudadanos appears to be sinking without anything much achieved, as the New York Times has it, thanks in part to Rivera’s ‘ideological incoherence’.
The PSOE smells blood says ElDiario.es here.
The jokes are now flying thick and fast (always a bad sign in politics), with Diarí Català leading the charge here. While even Felipe Gonzalez has torn up his party card says the satirical magazine El Jueves here.  A Facebook joke says that with the loss of MEP Carolina Punset (who left the party in October last year), Valls, Roldán, Nart and Vázquez, all Rivera’s got left to love him these days is Pablo Casado and Santiago Abascal.
The main difference between Pablo Iglesias, whose star is also falling, is that Iglesias has achieved much, while Rivera, outside of his party politics and personal ambition, has achieved nothing beyond division.
Posted by Lenox at 02:23