Around a hundred years ago, Mojácar had a population of six thousand people. Almost all of them lived either in the village itself, or in the surrounding hamlets, where water was available. Unlike today, few if any of them lived on the beach: views were not held to be of use then. 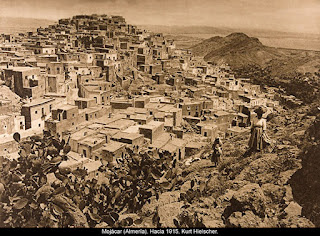 The town began to lose inhabitants following a fall in the water table (no doubt from having cut down all the trees), bringing inevitably less agriculture and more poverty. In those times, where the main way in and out was by sea to Garrucha, and the only land traffic was occasional donkey-trains heading towards Almería, Granada and Albox, life revolved around the raw material available locally. The village-folk of Mojácar never fished, and their prime sources of food came either from the huertas, the orchards, or the goat-herders.
An attack in the early years of the last century by a swarm of locusts put paid to the produce for a year or two, and many decided to leave for a better life. A regular ship called El Oranero left Garrucha for the Algerian city of Oran and then on to Barcelona every two weeks, and more than a few local people bought themselves a one-way passage.
The second bullet for Mojácar was the Spanish Civil War which lasted from 1936 to 1939. While the war ended with a Nationalist victory, the defeated side of the Republic (which included the entire province of Almería) was to suffer for many years from further shortages, rationing and privations. More people left as a result - ending up in many cases in Lyon and Marseilles in France (there are still Mojaqueros today who speak Spanish with a French accent), Frankfurt in Germany and, further afield, to Argentina (the Minguito restaurant in the village is a returned family from Argentina).
As they left for a better life, the people of Mojácar were unable to sell their homes. There were quite literally no buyers. The best they could do would be to dismantle their house, selling the rejas, the beams, the doors and the tiles for whatever they could find. These houses, once abandoned, were merely ruins. 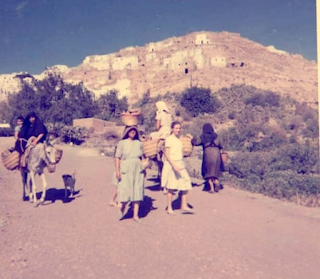 The very castle of Mojácar, described in the encyclopedia of 1920 as 'inmutable', which translates as 'unknockdownable', was demolished for its stone.
By the fifties, there was little left of the village. From six thousand, now only six hundred remained. Plans were afoot to be ruled from next-door Carboneras.
Then, the Civil Governor in far-off Almería chose Jacinto Alarcón to be the new mayor. Jacinto recalled that he had to decide where the very streets would go as the village was little more than rubble. He offered to give away ruins to those who would fix them up within a year. There were several takers including a few senior foreign diplomats (the Calle de los Embajadores in the village is tribute to this). His second idea was to approach the Minister of Tourism in Madrid, Manuel Fraga Iribarne, to build a Parador hotel on Mojácar Playa. To his astonishment, the minister agreed and the hotel opened in 1966.
Jacinto's ambitions worked and the fortunes of Mojácar were reversed. By 1965, the village was showing signs of life again.

The Internet Takes a Beating from Brussels 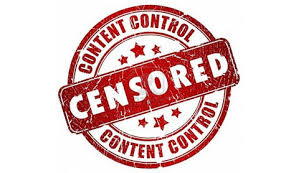 The European Parliament has just voted to impose a restriction on information available for use on the Internet including aggregators (at BoT, for example, we link to news-sites bringing them visitors). These ‘copyright’ laws, to be introduced in the next couple of years, are of course plainly designed to benefit agents, lawyers, impresarios and publishers (rather than musicians, writers and artists). From Meneame comes ‘...There are two particularly sensitive articles, the best known one obliges the platforms to take responsibility for the contents uploaded by their users. The theory is that a platform like YouTube should detect if a copyrighted movie – or a glimpse of one – is being uploaded. The practice is that any platform, including Github (for code) or Menéame (comments) should implement an active surveillance system that compares everything with a non-existent database. The incentive for platforms to play it safe and erase everything doubtful (including parodies, criticism or analysis) is too dangerous. But for the part that touches Menéame, there is an even sadder article. The famous "link tax" is approved, which means that the aggregators (at least the ones based in the EU) in theory will have to pay for linking contents, in contrariness to how the system currently works and what common sense dictates...’. The reason appears to be that while this would hurt all news-sites to some degree, it would by necessity hurt the smaller ones (who can’t afford sometimes ‘tame’ journalists and aren’t fed regular corporate press-releases) more.
Who owns the most enthusiastic news-providers in Spain, including the daily newspapers that make up the powerful AEDE (Wiki) and so on, we ask ourselves.
Público provides some background here (in a longish but instructive quote): ‘...The Banco de Santander, the one that got the Socialist government to pardon Botín, has money in Mediaset Spain. Telecinco belongs to them. The bank also has plenty of money in the PRISA group, which controls El País, El Huff Post, the SER and DIAL radio chains. The Banco Santander likes you to know who is in charge, and when it suits them, they buy the covers of all the written newspapers of Spain. The BBVA, the one that pays the Comisario Villarejo to investigate even governments, has serious money at Atresmedia, where the PLANETA group is, the one that has just published the book written by President Sánchez. Atresmedia controls the two TV channels Antena3 and La Sexta. Also invested there is the Banco Sabadell, the one who said that we needed a conservative version of Podemos. The CaixaBank, which has recently been accused of laundering money from Chinese mafias, has also invested in Atresmedia, as well as in El Periodico de Catalunya and the PRISA group.  ... In turn, a far from small part of the Banco Santander, 6%, is held by Blackrock, an investment fund that also holds 5% of the BBVA. Blackrock participates in nineteen Ibex 35 companies, with a total investment of 12,200 million euros.
The media generally lose money as we know. A naive question: why do the banks invest in media companies that are losing money?...’. Brussels to the rescue via its euro-deputies.
Evidently, the copyright defence in Brussels is not entirely about saving a few euros for some starving artists.
Hardwaresfera says ‘...The first thing is that it is the end of streaming games on YouTube and Twitch, since these will become illegal. This is because, since the games are copyrighted and used for profit, streaming is not possible. Neither will brief up-loads of music or image may be used in videos, while brands or games may no longer be mentioned nor images of third parties be shown – without explicit permission. Add to this, applications such as TikTok, Spotify or Facebook will be obliged to block copyrighted content...’.
Google says it is making changes to its platform (Google News, long departed from Spain, will disappear from all European sites). ‘...Google also has big changes planned for YouTube. They will apparently install or enable in the coming weeks a new filter using Artificial Intelligence. This will review each and every one of the videos and will detect even if a brand or a videogame is named. If the channel is detected, it could receive a penalty, demonetize the video, temporarily disable direct, prohibit uploading videos for a period of time and even erase the channel...’. Here are the parties which voted in Brussels for this, including from Spain, the PP, the PSOE, Ciudadanos, PDeCAT and the PNV. Podemos and ERC voted against. The senior PP man in Brussels, Esteban González Pons, said “I believe that the legislation is ambitious and protects quality journalism and the salaries of journalists”.
With luck, new politics forthcoming from the upcoming European elections may produce a brake on this corporate wet-dream.
Of course, like any Internet law, there are ways around it – including using a VPN and thus ‘pretending’ that your computer is outside the area of censorship.
Posted by Lenox at 05:02 1 comment:

Boiled Down, It's the Same Soup as Ever it Was 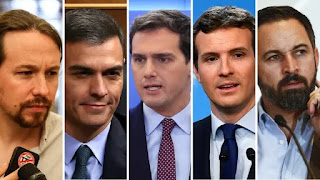 Spanish politics may not be of huge interest to foreign residents (perhaps because we can’t vote in most elections, and often don’t want to vote in those we can), but they do affect the lives of all who live in Spain (or who invest here) and with the slew of elections coming up, they are certainly worth watching.
Not that we have quite reached the stage of what the various parties have in mind for their country so much as what they think of their rival factions. Or perhaps, to fine-tune the above, what proposals, squabbles or situations the media want to report, discuss or even in some cases create. They might even get a TV leader-debate going.
Which is always fun.
There are the five main (constitutionalist) choices for Spaniards plus, in some regions, the separatists (local village politics having an infinity of parties).
The Big Five, to treat them all fairly, are divided into two groups – the Left and the Right. On the Left, there is the PSOE and Podemos/IU, versus on the Right, the Partido Popular, Ciudadanos and Vox. Thus, attacks and insults against future allies, reported (or created) by the media, are a red herring in that the voters should know that their preferred future government, led by the PSOE or the PP (we can be sure) will inevitably be enlivened by the minority parties of either Unidos Podemos and its allies on the one side, or by Ciudadanos and Vox on the other.
However, with one thing and another, and short of any post-election surprise (from the slightly unreliable ‘liberal y progresista’ Ciudadanos), we have the PSOE and friends versus the PP and friends. Most Spaniards would be sure that their vote for one of the other three would merely season the mix of the future government at best.
Perhaps the way for many would be to look at it as – which would be worse in the next government – a sprinkle of Podemos or a pinch of Vox?
Posted by Lenox at 04:29 No comments: 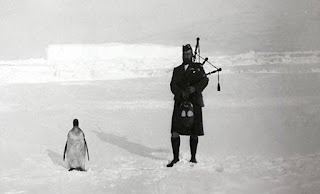 El País in English is just one of many sources that announces triumphantly that ‘Spain plans to grant residency to 400,000 Britons if there is a hard Brexit’, and, like most of the Britons resident in Spain, we at Business over Tapas are very grateful for this. It is indeed a fine thing when the Spanish authorities appear to care for us more than the British ones do.

There’s a catch though.
It comes in the second headline: ‘The contingency plan underscores that concessions will depend on securing similar treatment for Spaniards living and working in the UK’.
Will the UK allow the Europeans to continue living and working in the UK, much as before? Well, no. That was part of the thrust of the Brexit – to make it difficult, uncomfortable and even threatening for Europeans and other foreigners to stay in the United Kingdom (unless, of course, they were very wealthy).
If the British do go with a Hard Brexit in a few short weeks from now, and they do react against the Spaniards living there – said to be around 150,000 – then even if the Spanish authorities were feeling lenient towards the Britons living in this wonderful country, who knows what the next Government (elections in April) will think and, furthermore, what will the Spaniards themselves have to say as their white-faced friends and relatives begin to arrive in the Madrid and Barcelona airports?
Posted by Lenox at 00:38 No comments: