A Statue of Columbus Comes Down 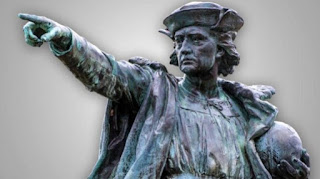 Poor Christopher Columbus, the man who Discovered America. They have just taken his statue down in Los Angeles because, well, you know, he committed genocide. A local councilman says: “It’s a natural next step of eliminating the false narrative that Columbus was a benign discoverer who helped make this country what it is. His statue and his image are really representative of someone who committed atrocities and helped initiate the greatest genocide ever recorded in human history, so the fact that his statue came down is the next step in the natural progression”.
The Spanish are very proud of him, understandably enough. In the same year that the Moors were finally ejected from this marvellous country, one of their sailors commanded three laughably small ships and crossed the Atlantic Ocean to discover the New World. Without any doubt, this was an astonishing feat. Columbus knew the world was round and thought he’d discovered a new route to India (which is why the Native Americans were called ‘Indians’).  Now, unlike Eric the Red and anyone else who had been there beforehand (the list increases every now and then), Columbus and the Spanish that followed (Cortes in Mexico, Pizarro in Peru and Núñez de Balboa who reached the Pacific), discovered and populated an entire continent (or two), duly plundered the spoils and made Spain very rich (although with most of it ending up in the fifteenth century equivalent of Swiss banks).
He was an adventurer: a man to stir the blood of small boys reading of his exploits and derring-do. Now he’s considered as a monster. How does this play back in Spain?
An indignant Arturo Pérez-Reverte says – they’ve just knocked down the statue of Crístóbal Colón in a giant city which, by the way, bears a Spanish name. El País runs an editorial on the fall of the ‘Genoese sailor’; saying (and edited) ‘...The majority of historians consulted strongly deny that Colombus can be called a genocide. He is a figure that until now had not been challenged thanks to his achievements in navigation, for colonizing a new space and for contributing massively towards our knowledge of the Globe. However, there is also a dark side, because the main motivations of that process had more to do with the yearning to find gold and spices. The conquerors found populations and, at times, destroyed their lives and culture, and there were confrontations with those who had every right to defend themselves against intruders. However, one cannot speak of genocide, because "there was no desire to exterminate a race, among other reasons because they were needed as labour".
But heroes must fall. One day, I think, the Moonlings will knock down the statue of Neil Armstrong.
Posted by Lenox at 23:09