There doesn't seem to be what we might understand as a 'government' in the UK any more. The people running the place, and the people in opposition, both seem convinced that by switching off the current, and then on again, they will somehow have, in some vague and ill-thought-out way, a better country at the end of the exercise. A brand new country with a blue passport, containing - don't forget - lots of pages in it for those visas the British - those that can bear to travel - will be needing.
How can the opposition not be an opposition?
Between them, the two main parties seriously appear to think that they will get a better deal from Europe - deal in any sense of the word - when they are outside?
You divorce your wife, and yet you still expect sex...
...and dinner and your clothes washed.
There doesn't seem to be neither rhyme nor reason to the Brexit - besides the joy of somehow sticking it to the foreigners (an activity long enjoyed by both the racists, the nazis and the profoundly ignorant). What can it possibly achieve -  a better trade agreement with the Malagasy Republic? Donald Trump, a man who evidently likes his cash, will come to the rescue of the plucky island nation? Is that the plan?
In some way, it might be a good thing with the UK crashing out of the European romance. The rest of the EU (with a population of 678 million people) might be able to move forward with its plans to federalise, to have a European army and both a single currency and borders. That would be something to be proud of - and part of. 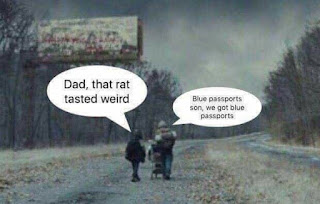 So the British junta, which, joking aside, no longer represents the majority of its people, will nevertheless impose its recessionary plan on its people. Fuck - no second referendum they say with one voice (fearful of losing?).
That's not democracy.
We Britons in Europe, living here without knowing if we can stay (we have no champions beyond a few earnest agitators in Madrid, Berlin and Paris), must either wait with resignation for some or all of our 'privileges' to be removed from us, or possibly (if the British junta really buggers it up) even forced repatriation.
It would be nice if the EU were to feel suitably appalled and consequently give us expatriates a special deal to allow us to stay - maybe a European ID card (issued gamely to us refugees). But, heh, they won't.
Otherwise, as the British mercilessly increase the political and social pressure on their resident foreigners (in some vague suspicion that they are taking their jobs and sleeping with their womenfolk), we shall be caught in the same trap.
Will there be room for one million two hundred thousand extremely irritated expatriates dumped unceremoniously back in the UK?
Where the Hell is a 21st Century Guy Fawkes when you need one?
Posted by Lenox at 12:03