Many of the subjects close to British expatriate interests have been discussed in the Brexit talks.
‘Don’t worry’, says the ambassador benignly, ‘everything will be all right’. ‘We simply don’t trust the British Government to represent our interests’, say, with a certain logic, the ‘Remainers’ – those who don’t live in the UK, that is. ‘Scaremongering’ (lovely word) disparagingly answer the surprising number of Brexit supporters who live – incapable of enjoying irony – in Spain.
In short, we must await events, as we shall only know how the cake turns out when we finally take it out of the oven (as our old grannie used to say).
One subject  which has not received any attention so far – and one which will affect all foreign residents living in Spain, regardless of nationality – is the right to vote and to be voted for: the voto active y pasivo which was ceded to the foreigners from EU countries in Spain’s first change in her Constitution, back in 1992. We EU citizens indeed got the vote, but (thanks to a disagreeable Minister called Rubalcaba) we were only able to vote in the European elections of 1995 and not the municipal ones. Per Svensson, myself and José María Martínez de Haro formed a pressure group called Ciudadanos Europeos to try and attract interest in our plight.
I even called for parallel elections with ghost candidates in the municipal elections of 1995 (earning my fifteen minutes of fame).
In 1999, we were finally allowed to vote in local elections, and even to form parties (why not?) and to join a local political party list. The expected surge in Partido Popular votes never occurred, because most foreign EU citizens (plus the Norwegians, who could vote but not run for office) never bothered to interest themselves in local civic affairs. In short (and much to the surprise of the Spanish politicians), they didn’t vote at all.
Nowadays, there are a few more countries – including Trinidad and Tobago (!) – enjoying bilateral agreements with Spain to allow their citizens to vote in local elections, while unable to feature in any voting list (i.e. el ‘voto pasivo’).
But, with the British departure from the EU in late February 2019 – two months before local elections in Spain – what will happen? 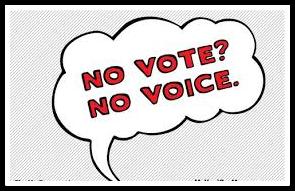 Will we Britons have the vote? Maybe (no one knows, no one says). Will we be able to continue in local politics? There are currently a number of British councillors – some very active in foreigners affairs. Will the lack of votes from the British residents lose seats and support for other EU councillors? Without going any further afield, the sometimes vice-mayor of Albox is Irish, the mayor of  Alcaucín is Belgian: both of whom have been very active in the issue of ‘illegal homes’ which their fellow-foreigners and supporters acquired ten or more years ago. Both of whom earned their position, in a large part, from British voters. Both of whom, without the British vote, would be unable to continue in politics.
Perhaps we British will be able to vote after all: with an elegant adjustment that, following Brexit, a bilateral agreement would be signed, restoring our vote. We would, of course, have to wait six months between being registered by the electoral board and being allowed to vote – unfortunately missing the May 2019 municipal elections. Oh my.

I was lucky to meet with the provincial (Almería) coordinator for Ciudadanos, Francisco Ramos, on Tuesday and to discuss the subject in some depth with him in a lengthy dialogue. He thought his party would be very interested in the matter and we will meet again for further discussions after the Christmas period.
Posted by Lenox at 07:03