The observatory in the high hills behind Almería, Calar Alto, has announced its discovery of a planet. The sun about which it circles every 86 days is a white dwarf, half the size of Sol, and the planet, currently called HD147379b, is apparently the size of our own Neptune. 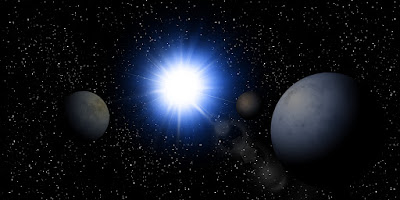 While some businessmen are already trying to figure out ways to urbanise the planet, it is probably not going to be a success - it's too far for Ryanair to fly to for one thing, has no atmosphere (a bit like Los Gallardos on a Tuesday night) and furthermore, doesn't have any 'solid surface' to stand on.
At just forty million kilometres away, the planet is rather too close to its sun for appropriate tourism (although somebody has already opened a souvenir stall there and there's currently talk of a naturist resort for sun worshipers).
Congrats to the Calar Alto astronomers are in order, however, especially since the observatory
is currently suffering from funding problems from Madrid.
Posted by Lenox at 04:12