Spain, Gibraltar and the Expats. An Interview with a Labour Ex-minister

A headline in Sunday's El Español quoting a British foreign minister from the time of Blair, one Denis MacShane: 'Gibraltar is as British as Melilla and Ceuta are Spanish'. The article - an interview with MacShane - begins with the upcoming election in the UK and May's tactical plan to sink the Labour Party. 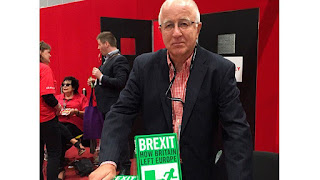 But, turning to Spain and Gibraltar, MacShane has this to say:
'Both Rajoy and Foreign Minister Alfonso Dastis and Economy Minister Luis de Guindos have made it very clear that Spain's future lies in a functioning EU. The last thing Spain would want is for the Iberian Peninsula to lose strength. It is true that Spain exports about 7,000 million euros in products to the United Kingdom and that is a good business. But it exports 110,000 million to France, Italy, Germany, Portugal and the Benelux countries. So the future of Spain at this time is in developing better economic relations with its partners in the EU.Then there is the question of Gibraltar, because May has done immense damage to the Rock by supporting a hard Brexit. Let's look at history. Gibraltar, in the last years of Franco, was in a terrible position of blockade and closure of borders. When Franco died, the United Kingdom supported Spain's entry into the European Community as quickly as possible. And as a result, the citizens of Gibraltar have been able to cross the border or buy villas and flats in Spain (Chief Minister Picardo, for example, lives in Sotogrande), and the Spaniards have been able to cross easily to Gibraltar. But once the UK leaves the EU, that automatic right to live and work disappears. It is a disaster'.
The current Spanish proposal for Gibraltar, to have shared sovereignty, is highly unlikely to occur, says MacShane, as neither the Gibraltarians (rabidly pro-British), nor the hard patriotic British element, now in ascendance in the UK, will allow it, thus thrusting Gibraltar into isolation from Europe. Along with a closed border, Britain's absence from Brussels means that the EU's gentle treatment of The Rock's 'exotic fiscal regime' will be changed for a harsher approach.
And, regarding Spain's relationship with the UK, post Brexit?
'It will be harder for the British to retire in Spain as they have done so far, especially if they lose their automatic healthcare coverage and other privileges that come from being in the EU. There are currently 300,000 Britons registered in Spain, but the real figure could reach one million. In the last 30 years, Spain has been a species of Florida for the United Kingdom. And both countries have benefitted. I hope that can be maintained; and when May understands the depth of the problem, that she changes her approach'.

While he is probably right about both Gibraltar and the fate of the British in Spain, post Brexit, a few points to consider.
I think of Gibraltar as being closer to Andorra (rarely mentioned, but with a similar tax and business climate to Gib). The Spanish habitually use it as a money-laundering place (notably Pujol, the ex-leader of Catalonia and indeed Mojácar, which years back twinned with the banking paradise of En Camps). Andorra is a sort of mini Switzerland. It is not in the EU, yet its currency is the euro. It is never ever mentioned in Spain in the same breath as Gibraltar.
Melilla and Ceuta, two slightly pointless possessions on the North African coast, have a much larger population that Gib. Between them, 160,000 inhabitants, pretty much all firmly pro the Partido Popular. The Spanish refuse to compare the situation with 'Europe's Last Colony (Pop. 30,000)' and yet, a 'reconciliation' would gain Spain a couple of square kilometres of territory, 30,000 mutinous new citizens, and the larger loss of their two enclaves  in North Africa (plus a few incongruous islands, rocks and lumps). The citizens all repatriated to the Spanish mainland and... oh... it's not going to happen.
For Gibraltar, however, a shared sovereignty is a good plan. It allows them to continue as before (largely untouched by a now very satisfied Spain), and releases the future pressure on the British expatriates living, as MacShane says, in Europe's answer to Florida. Perhaps we, too, could be offered a second passport...