It's an improbable story - how an unknown stringer from the Euro Weekly News received two parliamentarians who told him (exclusively) that Spain was planning a lockdown six weeks hence. The article then says that  '...The two Spanish members of congress also revealed to the Euro Weekly News on Saturday that talks have taken place with other nations prime ministers advising of the set-out plan including UK’s Boris Johnson...'.

Following the panic that the article understandably caused among readers of the weekly, a second article appeared from the same writer, one Alistair Pike, saying '...After the Euro Weekly News published a factual article in regards a conversation between a reporter and two government ministers, that described how plans were being put in place in the event, that if coronavirus figures in Spain continue to escalate, social media has gone into meltdown.
The article headline clearly states Spain is set to go into lockdown phases if the coronavirus continues to spread across Spain...'.

The second article was also critical of the police-run Facebook N332 which had said in turn: '...There is NO OFFICIAL CONFIRMATION from the Spanish Government yet about a new ‘lockdown’ at all...'.

Other sites which have featured the story:

The Olive Press headline was: 'British Embassy unaware of any plans for second lockdown in Spain after article causes mas confusion among expats'.

The Global247News (weird site) here: 'Spain’s going back into LOCKDOWN on Friday September 18th'. It includes some reactions from local residents (yet was posted only one hour after the EWN original).

Later, the fake-news watchdog Maldita Bulo came out with ¿Qué sabemos sobre un supuesto plan del Gobierno para retomar el confinamiento el 18 de septiembre? What do we know about an alleged government plan to resume confinement on September 18? Journalists from the site checked with the Ministerio de Sanidad who say that 'they don't enter into foretelling the future'. Two other sites that expose fake news, Salud sin Bulos here and Newtral here both throw cold water on the story.

The Dutch Spanje Vandaag said on Tuesday 'Engelstalig Fake news over lockdown vanaf 18 september in Spanje' which is easy enough to translate.

A YouTube feature in Spanish here explains the article, doubtfully.

The EWN piece received numerous comments of all descriptions on many different Facebook threads. Some were enthusiastic, others called it 'fake news' and others still were disappointed and talked of cancelling or rescheduling their holidays. One said, 'I cannot believe a government would be issuing a statement on what it is going to be doing in .....6 weeks time!'.

From the same plucky journalist, Alistair Pike, who from his desk in the Euro Weekly News building has been (apparently regularly) in contact 'with the Spanish Government', we read on August 11th:

'The Spanish government in Spain’s Madrid (heh!) have issued a “no further comment” in relation to potential lockdown claims in Spain.
Spain’s government have been in direct dialogue with the Euro Weekly News for the last 48 hours, as we pushed them on answers, as they wish to deny a previous article...'. But then the article gets a little silly... including this gem: '...Finally, would it be possible to have an interview with Prime Minister Mr Pedro Sanchez where he can let us know his plans and we can relay them to the large expat population in Spain?' .

The EWN's Facebook page (tragically, I've been banned) features the story with some comments, including this one: 'Sod off! Not fake news!'.

The official Palace communication: Juan Carlos I de Borbón is to leave Spain and go into exile. El Mundo reminds us of the reasons here. Diario16 tells us that the ex-king will move to the Dominican Republic. By Tuesday, he was already there (a republic, as somebody points out). The much-suffering Queen Sofía remains in the La Zarzuela palace. The official Government opinion is to ‘respect’ the decision of the ex-monarch to go into exile and to applaud the ‘exemplarity and transparency’ of Felipe VI (here), with the vice-president Carmen Calvo saying on Wednesday that ‘the ex-king is not in flight from any legal cause’. Unidas Podemos seemed less sure of this, as they belatedly called for the arrest of the ex-king (here).  The foreign press was unsympathetic about the sudden departure into exile but the Spanish (printed) press was kind. ‘The political parties are divided over the former king’s decision to leave Spain. The rift is also apparent within the coalition government of the Socialist Party and the leftist Unidas Podemos, which accuses the emeritus king of fleeing the justice system’. Thus says El País in English here. A piece from The Spectator (firewall) has a good summary here (if you can read it) titled ‘Juan Carlos’ exile may not save the Spanish monarchy’. It says ‘…For the moment, the monarchy is safe: August is Spain’s holiday month – and a good time to bury bad news. King Felipe will continue to work to improve the monarchy’s image, and will hope that the problem blows over. The worry, however, is that there will be further revelations about the ex-king in the autumn and winter, when many Spaniards are suffering the economic consequences of the pandemic…’. El Mundo is more direct: ‘The PP and Ciudadanos criticize Pedro Sánchez for not stopping Pablo Iglesias' (‘intolerable’) "attacks" on the Monarchy’. As for Vox, notes the article, ‘Sánchez’ betrayal’, says Abascal, ‘is as disgusting as his concealment of paedophile plots or drug money’. Err, Quite. 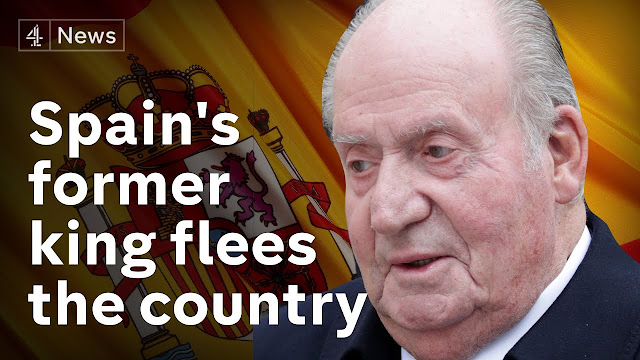 Giles Tremlett writing in Spanish at elDiario.es: ‘Exile will not stop the process. What is more worrying than the alleged private sins of a monarch, which are yet to be proven in court, is how far the ruling class in Spain has gone to protect him’. He has something to say in The Guardian as well.