Just as La Voz de Almería tells us it has rained more in the last three days than in all the entire months of August, put together, from 1968 to 2016, with 53 litres per metre in Garrucha, we also read (in Almería Hoy) that the water people, Galasa, have put up the price of their product by anything up to 200% or more (the Macael prices went up by 245%, it says). Here in Mojácar, my bill, per litre, is up around 50% over the last one.
The PSOE blame the PP, says Almería Hoy. Funny, I remember when we had water from El Pinar, operated by Servamosa where we had to buy 'dotaciones' to be able to be considered a customer. I had seven for the farm. The PSOE created Galasa which 'absorbed' the installations from Servamosa. None of us who had dotaciones were ever reimbursed. There were said to be 10,000 of these shares, valued at 80,000 ptas each...
Now, who was it who ran Servamosa...?
Posted by Lenox at 01:19 No comments:

Independence on the Horizon


Following on from the recent terror attack, Barcelona was host on Saturday to 500,000 people who had come to show their feelings against terrorism; the King of Spain and Mariano Rajoy were among them. But, anything to do with Catalonia means politics, and there are items aplenty to suit every position. 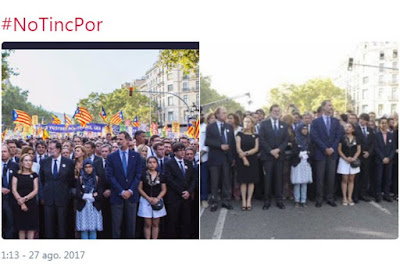 To help readers make up their minds about the perfidy of the independentistas (the threatened referendum is only a few weeks away), Spain’s right-wing daily La Razón airbrushed out of their front-page photograph of the demonstration the bit they didn’t like and added a patch taken from another view. The photographer himself explains what happened (in Catalán) here. Another example, even easier to appreciate (picture), shows the real and doctored photos put out by the Palace and the Moncloa (here). For pro-Independence news, one needs to go to the Catalonian press like La Vanguardia, or, perhaps a trifle surprisingly, to The Guardian here. Many of the demonstrators certainly used the occasion to push for Catalonian independence, and many placards veered from the ‘We are not afraid’ line to other more pointed issues against Spain or in favour of Catalonian statehood. The bit that most Spaniards didn’t like was the criticism – in many placards and Catalonian editorials – of the King and his apparent friendship – or alliance – with the Saudis – and their apparent sponsorship of terrorism. Certainly Spain sells them a lot of arms - in fact, when it comes to this profitable but unpleasant export to the region, Spain takes third place internationally.  Mind you, the ABC, another right-wing newspaper, points out here that a quarter of Spain’s arms industry is produced and exported by the Catalonians themselves.
Who would lose out more if Catalonia were to secede from Spain? El Español says that Catalonian Business would lose 20,000 million euros and unemployment would rise up to over 40% within a year following the ‘disconnection’. El Confidencial also looks at the issue here and notes that Catalonia’s export and tourism industries are the strongest in Spain, so would presumably be fairly resistant. Indeed, as we have seen, Spain itself would lose 14% of its territory, plus a chunk of its economy, its tourist numbers, its influence and its population – although Catalonians are told that they will be able to hold double nationality (here).  It would also be open to losing other regions along the way, including the Basque Country and perhaps the Balearics. Andalucía? Madrid should be so lucky.
El Español warns that ‘the passivity of the Spanish Government over Catalonia is very dangerous’. They may have a point, but what can they do now – send in the police and make mass arrests... Send in the army...?
To underline the Spanish confusion about Catalonia, there’s a page on Facebook run by the Ultras called Boicot a los Productos de Cataluña. With around 60,000 supporters. What’s this – they want Catalonia to stay part of Spain... by bankrupting them?
The referendum, short of some surprise move from Madrid, will take place on October 1st, with the campaigning due to start on September 15th and (if we can believe a pro-secessionist site here) the independentistas look set to win...
Posted by Lenox at 13:43 No comments:


The horrid events in Barcelona last week appear to have reached their conclusion, with the shooting of the homicidal van driver by the Catalonian police, the Mossos d'Esquadra. There is some political and social fallout still to come, no doubt (including a squabble over who should be present in the solemn ‘no tinc por – we aren’t afraid’ Barcelona march on Saturday), but the greatest effect on all of this may be on tourism.
Spain has known that it was – and is – a perfect target for the nihilism of the jihadists. This fine country is easily attacked, as it relies so heavily on tourism – an industry that can, under certain circumstances, disappear pretty much overnight. Perhaps those that visit the cities with their monuments and museums are a different type of visitor to those who choose the beach and its attractions. Perhaps the fear will be contained. ETA knew this, with its bombs in Benidorm and the Costa Blanca during the eighties and nineties. The simple tourist, looking for time with his family, away from the drab factory workplace, will be quickly convinced to change his travel plans following the threat of an attack (the foreign resident, of course, will stay put, with his heels dug in).
How can we stop these creatures? Bollards may stop a swerving truck here, but how about there? Do we need more police... or more ‘intelligence’... or more controls...? Should we concentrate just on tourism – are other areas less likely to be attacked? What about some other alternate but equally vile plan from the jihadists to bring us down – poisoning the water or kidnapping someone famous? Presumably, someone somewhere is hatching a fresh plot right now. Meanwhile, as both feared and anticipated, we have a small but growing call for some form of massive institutional violence on our part, a pogrom or even a war. We are discovering hatred growing on our side, on what should be the Side of Reason. Racism, ignorance and bigotry. The terrorists had planned a larger attack, says The Local here, including a plan to destroy the Sagrada Familia. That would have probably tipped the Spanish into entertaining the most terrible reaction.
Meanwhile, the political parties have broadly agreed to an ‘anti-jihadist pact’, which Podemos has sent observers to, but won’t join. The Government of the Partido Popular, says Podemos, is blithely doing business with several Middle Eastern sponsors of terrorism. Maybe if we did attack them, they would use those very weapons we have been selling them for decades against us.
But, back to tourism – have the record numbers stumbled at all? Maybe, if they do, it will be down to the forthcoming strikes in Spain’s airports...
Posted by Lenox at 06:06 No comments:

It's hard getting an FM radio licence here in Andalucía. You need the written permission of the appropriate department in the Junta de Andalucía or you will end up with a huge fine. Huge. I was working for La COPE in Mojácar for a while. La COPE - the radio in the tower at the Parque Comercial - was part of a large radio presence owned, thanks to an edict from Franco, by Spain's bishops. You become a bishop, you get to share control of the COPE, you become an archbishop, well, you are on to other and no doubt greater responsibilities.
The Junta de Andalucía doesn't like the COPE. It's reporting is obviously rather right-wing, and the Junta's politics are firmly to the left.
So, the Junta sent a letter while I was at the radio. Your station is to be closed down as you have no licence and your 'dial' - your frequency - is to be given to La SER (a left-wing station, owned by the El País people). There wasn't a SER in Mojácar at the time, but some fellows were easily enough rounded up and the broadcasts quickly began.
Shortly after that, they moved to Vera.
So, the COPE was closed (a fine of 600,000€ was mentioned by the smoked-salmon socialists of Seville). In fact, although the COPE is one of the top three commercial stations in Spain, there are no COPE FMs in the whole of Andalucía.
Around the same time, another Mojácar radio, Radio Cool, was also closed by decree following a compliant from a competitor, and a smaller if still considerable fine was levied against that radio as well.
Mojácar's only radio today is Spectrum, which has a peculiar (indeed, unique) licence from the Ministry of the Interior in Madrid.
Mojácar has a licence for a 'municipal radio', but the mayoress doesn't want anything in Spanish on the local airwaves, as, well, they might say the wrong thing in a moment of madness...
Another radio which was causing problems for the Junta, no licence and the wrong politics, was Radio La Marinera, broadcast out of Puerto Rey by a retired pop singer called Andrés Caparrós.  After another huge fine and other threats, Andrés started broadcasting on the Internet and through the social media (which the Junta can't control), but he has now thrown in the towel, it says here, after a number of years of his radio broadcast. Not many people listen to satellite radio, beyond a few die-hard Radio 4 listeners connected to their digiboxes.
Internet or satellite radio may be the way forward, but governments can't control the content and, for this reason, European cars are not fitted with satellite radio. Imagine that.
Posted by Lenox at 04:38 No comments:

Half of the British think they are cleverer than the Europeans.
Unfortunately, it's the stupider half.
Posted by Lenox at 08:30 1 comment:

Strange and Frightening Headlines in The Weenie

Churning through the dribble that is printed in the Almería incarnation of The Weenie as I generally do, I give you here their last few front page main titles.
A paper which, presumably, is meant to encourage visitors and promote both the area and the businesses within.
What do these headlines have in common, I wonder?
Today's effort is 'Drug-fuelled Frenzy. Man Arrested For Assault'.
The previous weeks follow below:
'Gang Warfare. Gypsy Turf War spreads'
'Dead to Rights. Fire Killers locked Up'
'Up in Smoke. Cannabis Factory Shut Down'
'Text Horror. Serial Child abuser Held'
'Deep in the Red. Provincial Debt Nears €500 Million'
...and so on.
It's not as if there's much of any news about Spain inside, after all.

A Zebra Crossing is just a Travelling Donkey with Stripes

Driving quietly home from the beach (I try and get my stuff done by 10.00am when the traffic  gridlock and road rage begins), I was behind a truck and a few cars by the time I had got to the Fuente de Mojácar. The truck was stopped at a zebra crossing to allow a pedestrian his right to cross the road. Operating on the principal of 'everyone's gotta stand somewhere', the old fellow was looking placidly at the line of vehicles before remembering his manners and waving the truck forward. By the time I reached the crossing, several cars later, he was still there, gazing into space, perhaps remembering other times, when there was only a few donkeys and underpowered motorcycles clogging up the road...
Posted by Lenox at 01:52 No comments: